King could follow in footsteps of predecessor Gary Norton 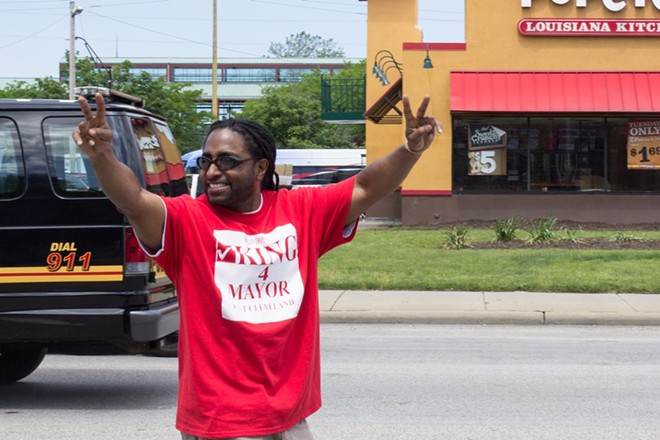 East Cleveland Mayor Brandon King could become the second consecutive mayor of the cash-strapped east side suburb to be removed from office by his constituents when he faces a recall election on Nov. 8.

At its meeting Monday morning, the Cuyahoga County Board of Elections set King's recall date for Nov. 8, the same day as the 2022 general election.  The BOE last week certified the signatures submitted by those leading the recall effort, including East Cleveland council members Korean Stevenson and Patricia Blochowiak.

Under East Cleveland's charter, King had until Aug. 18 to resign his seat or else face the voters.

The expectation was that the recall would be held in November, but Monday morning, King appeared before the BOE and asked them to consider a special election in October.  He said residents had been duped into signing the recall petition and lamented the suburb's political turmoil. King himself only became mayor after his predecessor, Gary Norton, was booted from office by voters in 2016 via recall. King won re-election in 2017 and then again last year.

King's opponents believe that he has spent public funds unlawfully and used the police force as his private army, as illustrated by an ongoing high-profile lawsuit. William Fambrough, a veteran East Cleveland political operative and one of the recall leaders, alleged that he had been targeted by East Cleveland police during the 2021 mayoral race.

At that time, Fambrough was campaigning for King's challenger, city councilwoman Juanita Gowdy and had equipped his van with speakers to broadcast messages supporting her. His vehicle was towed by East Cleveland police, and he was cited for a noise violation. Fambrough's subsequent lawsuit, which is ongoing, received national attention. The police actions were described as retaliatory  First Amendment transgressions.

At Monday's BOE meeting, one citizen representative spoke on behalf of the recall effort, advocating for the general election date so as to attract as many voters as possible.  The BOE agreed, as the schedule aligned with rules outlined in the city charter.

East Cleveland has been in a state of fiscal emergency since the Fall of 2012. Despite efforts to get its accounts in order, including by instituting a hiring freeze and selling publicly-owned properties, it's still a long ways off from clearing its debts.