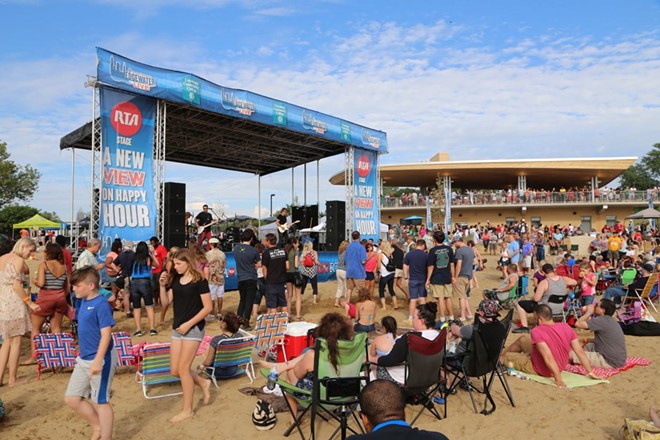 After what feels like an endless winter, spring and summer are heading our way with the return of Edgewater LIVE! Happy hour specials and local made-to-order fare from the Beach House will be available in addition to a rotating roster of food trucks, all backdropped against the Cleveland skyline and Lake Erie.

Presented by Cuyahoga Community College, the concert series will kick off May 31 at 4:30 p.m. on the Centennial Plaza at Edgewater Beach House with performers from the Tri-C Creative Arts Program. Weeks following will showcase headlining acts including Wanted: The Bon Jovi Tribute band.

According to the Cleveland Metroparks' website, this year is will debut the Edgewater Nature Shop that will "enhance beach and recreational offerings for visitors throughout the summer season." Customers will be able to rent standup paddleboards, umbrellas and chairs as well as purchase towels, sunscreen, Cleveland Metroparks merch and much more.

While the return of Edgewater LIVE is exciting for many, it also coincides with major construction on the West Shoreway, the major route for many to actually get to Edgewater Beach.

Construction on the Shoreway is scheduled for the entire summer, starting with the righthand lane on the Main Avenue Bridge closing in each direction until the end of May. Shortly following, construction will shift to the middle lane until early July, and then the left lane will close in July until the end of August.

Anyone who has driven on the Shoreway during Edgewater LIVE can attest to the gridlock that occurs during rush hour when all of the lanes are open. Shrinking the Shoreway down to one lane throughout all of this sounds like a recipe for disaster. Maybe bike over, use public transit, or ditch the car in Detroit-Shoreway and use one of the pedestrian tunnels instead.

On the bright side, driving in bumper to bumper traffic will finally appease the wishes of the 35 mph posted speed limit.