From East Cleveland to a National Poetry Fellowship: Cuyahoga County Poet Laureate Honey Bell-Bey Is Getting Her Due 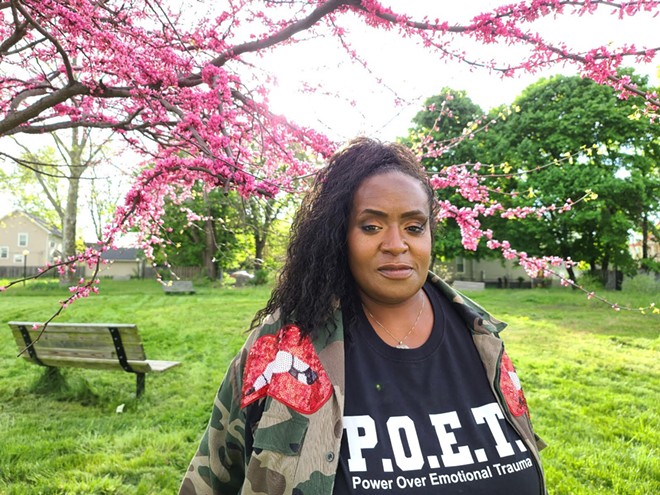 The prizes, $50,000 to $100,000 in range, are unrestricted awards given to commend poets appointed to serve in civic positions.

Receiving the nod was a major moment for Bell-Bey, who didn't think she had a shot.

She was in her doctor’s office when she received the news. Patients were being issued masks for COVID-19. She leaned against the wall, and, out of concern, a nurse asked her was she OK. Overhearing the conversation, another nurse exclaimed “Oh, she’s alright! Based on what I just heard!”

She also recalls being in disbelief when, while distributing items at a local food bank, she saw her picture in a New York Times article featuring the winners.

“It was like God was saying, ‘I got you,’” she said. “When you are busy doing the work of God, then He will come in and bless [the work]."

Reading works such as Phenomenal Woman and Still I Rise, Bell-Bey hopes that the legacy she leaves is found by another little girl that “finds a way for her feet to fit in those shoes.”

The East Cleveland native says that she's been a poet her entire life, and that, as an educator of poetry, she strives to bring the passion of poetry and language arts to young people and women.

“I’ve always used the power of words to transform emotional trauma and put [ourselves] into the driver’s seat of [our] lives instead of staying in the position of the victim,” she said. “It just so happened that I would use poetry to do that. It's intentional work. Like an emotional gangrene. It will eat you alive.”

She recalls spending a number of years in pain and relates to being a Black woman in the silent suffering. “We are unintentionally taught to be strong,” she said. “You don’t let people see you cry or break, and that manifests inwardly. People see it though, in our relationships and who we are physically and emotionally.”

She also recalls being told that Cleveland would not have a poet laureate, then gracefully receiving title for the entire county. After her appointment as lareate, just one year later, she received the The Academy of American Poets Laureate Fellowships award.

The money is nice, but that's not the part that most satisfies her.

“I sincerely appreciate the financial incentive to further my work, but the thing is that I have been doing this my entire life with no money,” she said. “Yes, I have never been dictated by money, but the title, that was due me.”

Working through the COVID-19 pandemic hasn’t changed Bell-Bey’s message in her work, nor has it deterred her from her mission. “When the schools closed, I opened a virtual academy the next day,” she said. “I wasn’t playing. I was ready.” She continues to reach young people with her virtual classes where she teaches using puppetry, poetry, life skills, cooking ,painting, reading and writing to engage the students.

One of her lead students, Caillou Allen, will be attending Morehouse College in the fall. Motivated by Bell-Bey’s teachings and his upbringing, Allen wants to give back to his people. He loves to read and keeps constant dialogue with her on several topics “The knowledge that when I grow up, I will be able to reach back and help my Black people, that inspires me,” he said.

Bell-Bey shares the feeling. As a revolutionary, she believes in using the power and energy used in the generations before her to produce results. “What are you doing right now?” she questioned. “What are we doing with our power?”

With the award received from The Academy of American Poets Laureate Fellowships, Bell-Bey plans to initiative several projects. For instance, she wants to aid writers that are not financially able to publish their work. “They don’t know the tools to use, they don’t know the editing process,” she said. “I am going to walk them through that.” Once individuals complete her virtual sessions, she would like to aid in paying for publishing. She is adamant in pushing the power that helps people tell their stories.

She also plans to utilize P.O.E.T. (Power Over Emotional Trauma) to help women travail over their experiences. She would employ healing workshops with poetry being its foundation. “I really want to help women with these still waters that run deep,” she said. “It’s that stuff that you don’t talk about, but it’s still there. Everyone of us has power over that thing that tried to make us powerless.”

Biking is a passion of Bell-Bey’s and also intends to buy all of her students good-quality mountain bikes.

As an Ohio Certified Prevention Specialist, Bell-Bey will continue her work with chemical dependency prevention. She works with the Cleveland Urban Minority Alcoholism Drug Abuse Outreach Program to provide services that promote health and drug free living among the African American citizens. She will also utilize the program’s facility, located on 79th street, for her recently opened food pantry. Every Wednesday at 11 a.m., she and her team provide fresh produce and meat from Dave’s, Heinens and Giant Eagle for the community.

Bell-Bey feels that her life, in the current moment, is ‘the tale of two cities.’ “It’s the best of times and the worst of times,” she said. While she is thrilled to continue her work she relates to the pain that many people are facing through this pandemic. “When you are mission-driven, you never stop serving."