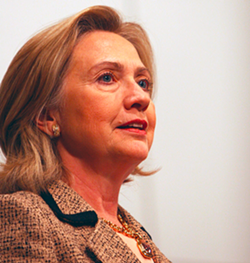 Wikimedia
Update: Details regarding Ms. Clinton's upcoming visit to the Forest City have been released. The Democratic presidential hopeful will speak to the public at a 'Commit to Vote' Grassroots Organizing Meeting on Thursday, Aug. 27 at 9:30 a.m. at Case Western's Tinkham Veale University Center.

Doors open at 8:00 a.m. and the whole event is expected to wrap up by 10:30 a.m. Folks interested in attending can RSVP here.

Cleveland.com reports that Clinton will attend a fundraising event on Thursday afternoon at a private residence here in Cleveland.

Word has it that Clinton is also planning to extend her visit to attend the second annual Scene Pig & Whiskey event, which kicks up the following day.

She's scheduled to arrive in Cleveland on Thursday, Aug. 27 and is expected to make a case for her presidential run and launch recruiting initiatives for 2016 campaign volunteers, Cleveland.com says. A location and time have not yet been unveiled.

Clinton's visit follows on the heels of the first national Republican debate, which is taking place live at Quicken Loans Arena on Thursday.