Is Cedar Point Retooling the Mean Streak as a Steel-Wood Hybrid Coaster?

On Monday, August 1st, Cedar Point officially announced the closure of one of their two wooden coasters, the Mean Streak, which would stop rolling Friday, September 16.

When Mean Streak first opened in 1991, it was the tallest, fastest wooden coaster in the world. Built by Dinn. Corp., it was a very popular ride when it first opened, but the park said it had seen a steady decline in ridership in recent years. In spite of efforts by park management to extensively re-track the ride in 2012, the Mean Streak still had a reputation as a rough ride among some riders. When I visited the park this past weekend, I rode the coaster and didn't think it was all that very rough. I did, however, find the layout rather boring. After the initial drop, the ride merely meandered around several hills and turns.

Anyway, initial reaction by many after Cedar Point's announcement was that the coaster was simply going to be torn down. However, there is significant evidence that this is not the case. One historical example: In 2014, Cedar Point announced that their stand-up coaster Mantis would “Get Squashed” and close forever as well. Two weeks after that announcement, we learned that the ride would reopen the following year as a floorless coaster called Rougarou.

Which brings us to today. In early June, several markers and surveying flags began to appear in and around the supports of Mean Streak. This lead me to inquire with a ride operator on another popular ride at Cedar Point, Maverick. The ride operator hinted that the ride would be closing and then reopen as a steel hybrid. He even went as far as to say that this tentative rehabilitation would be completed by Rocky Mountain Construction.

In recent years, Rocky Mountain Construction (RMC) has become famous for rehabilitating old wooden coasters with steel track. These new rides are completed with steeper drops, overbanked turns, and even inversions. However, the ride keeps the basic layout of the original wooden coaster. In addition, the new rides use the same wooden structure as their original
counterparts. 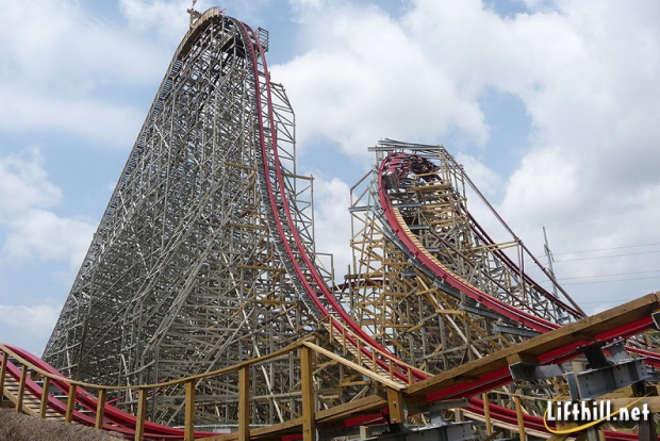 This rehabilitation has also been completed on several other roller coasters across the Six Flags chain. These rides are extremely popular. Some have even gone as far as to say that if  Cedar Point were to redo Mean Streak with the RMC hybrid treatment, it would be the best ride at Cedar Point.

Although this hasn’t been confirmed by park officials just yet, we could expect an announcement of this rehabilitation in late September or early October. Otherwise, the park has other news to share, including the possible expansion of Soak City. An announcement looks to be coming on August 18.

Below: a POV of a fan made rendition of a possible RMC Mean Streak hybrid reconstruction.