While Sacred Waters was welcomed in Lakewood, it's run into trouble in North Olmsted 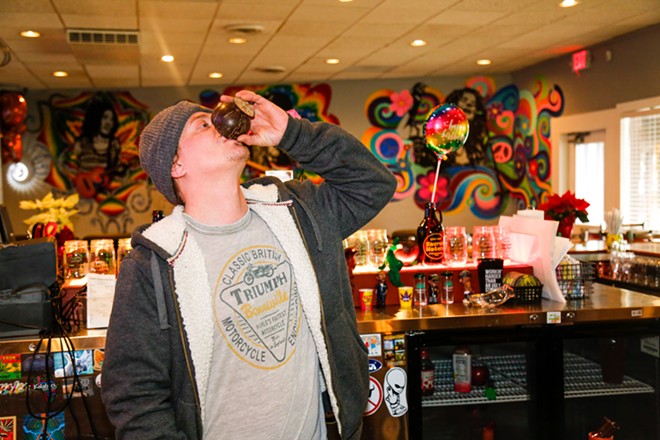 Mark Oprea
David Kovatch, the 38-year-old owner of Sacred Waters in North Olmsted, has been sparring with the city regarding its recent crackdown on herbal supplements on tap.

In the realm of serving herbal supplements by the glass, David Kovatch may be Ohio's Julia Child.

Turning to ethnobotanicals after battling alcoholism in his twenties, Kovatch opened up the state's first kava bar in Lakewood in May, which slowly became the de facto hang out for sober dudes like himself who've been swayed by, as he says, "powerful plant allies." Those mostly being kava and kratom, Polynesian and Indonesian herbs that are growing as alcohol substitutes in places like New York, California and Tampa.

"I'm trying to help people," Kovatch said last week, sitting on a mid-century modern sofa in Sacred Water's second cafe, on Lorain Ave. in North Olmsted. Around him are spider plants under paintings of Japanese mushrooms, books like Backyard Pharmacy and The Art of the Occult. Above Kovatch is four red-neon letters from the closed Dave's Market in Collinwood, spelling out Sacred's piece de resistance: K-A-V-A.

"I'm just trying to give people an alternative that's not destructive," he said.

Though Kovatch's first enterprise went swimmingly in Lakewood, he's recently encountered what he describes as "threats" from North Olmsted city hall. On November 1, two weeks after Kovatch soft-opened his $400,000 kava bar, which used to be Best Damn Tacos, Mayor Nicole Jones and  Councilwoman Angela Williamson issued a moratorium on "the sale and consumption on site" of kava and kratom, the same substances that flow regularly through taps, and into coconut shells, at Sacred Waters' bar.

Other than declaring an emergency measure "for the immediate preservation of the public peace," the city's moratorium, which passed 7-0 in council, "temporarily [prohibits]" any "permit, license, variance or development plan approval" for any new business aiming to imitate Kovatch's cafe. The impetus, many like Kovatch say, is a jump-the-gun reaction to herbal drinks that could, like in Kovatch's mind, keep those with addiction issues off the harder stuff.

And it could, Kovatch said, lead to a further crackdown on related retailers selling supplements.

"I wouldn't characterize it that way," North Olmsted Director of Economic & Community Development Max Upton told Scene. "We're gathering information to create a policy that preserves the health, safety and welfare of our citizens. It'd be very presumptuous to say that we're contemplating an outright ban on these as an administration." 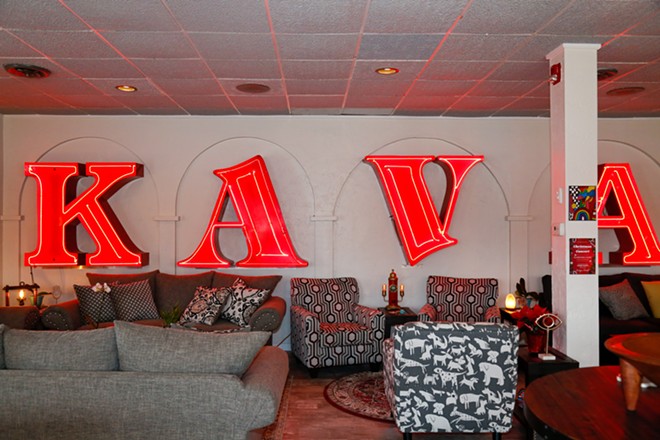 "David's in it for the right reason," said Karen Mueller, who's been selling packaged kava and kratom at Memie's Green Room, a supplement store down the street from Sacred Waters, since December 2019. "He just wants to make sure the community has a nice place to gather without it, like, being a bar where people get intoxicated."

It was Mueller who joined Kovatch at the council meeting November 1st, when Jones and Williamson introduced the moratorium for vote in front of 17 city leaders. According to the meeting minutes, several councilpeople present expressed concern that, as one stated, more research on kratom is needed to "make a reasonable decision." Upton argued that "there is a distinct difference between selling these products and serving and consuming these intoxicating substances on site."

Kovatch, who had shown up to the meeting with his lawyer, Malek Khawam, was baffled. He had passed out info sheets with data from John Hopkins University, and yet felt like Jones didn't take him, or Mueller, seriously.

"They didn't even look at the information," Kovatch said. "It didn't even matter what I said. They made their decision before I walked in the door."
click to enlarge 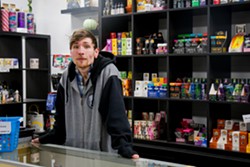 Mark Oprea
Keith James, a co-owner of Brick City, a vape shop that sells Delta-8 THC, said he's worried in general about what North Olmsted's moratorium on the product he sells means for retail culture.


As far as the real lowdown on kava and kratom, studies are generally scattered, with the scientific consensus leaning slightly to herbal benefit rather than Class-D narcotic. Sellers like Kovatch say that the handpicked, quality supplements they buy wholesale often get lumped in with the lower-grade product or supplements like tianeptine that are known to be dangerous, and which Ohio just banned.

While kava, which is named after the numbing kavalactones found in the ceremonial root, was banned in three European countries for decades, those were lifted in 2015 after the Swiss study that accused it of causing liver disease was discovered to be biased. According to Kalm With Kava, there are "more than 180" kava-centric bars across the U.S. that serve, like Kovatch, the caramel-colored sedative.

As for kratom, the verdict is a lot vaguer. Although a Johns Hopkins study—one that Kovatch cites frequently—shows that 41% of kratom drinkers use the leaf to wean themselves off opiates, kratom is still considered a Drug and Chemical of Concern by the DEA. Drinking the substance, which Kovatch mixes into soda or steeps into a tea, produces a sudden feeling of euphoria, which, even he admits, can be too psychoactive to some drinkers.

It's a tricky area that herbal salesmen like Kovatch and Mueller shy away from. Kovatch often admits he's not a licensed herbalist, yet uses his own experience producing and taking ethnobotanicals to walk newcomers through the menu.

"And we won't serve you unless you're 18," Kovatch said. "We're self-regulating. We make the responsible decision."

Regardless of Kovatch's pitching of Sacred Waters as a safe space—"my home away from home," he said—North Olmsted is unwavering. While Kovatch said he's grandfathered in, and can't be pursued legally for serving kava on tap, the moratorium will be in effect until the city finds a proper way to regulate herbals, most likely in May. Something, as the ordinance states, not "contrary to the character of the City's General Retail zoning district."

Kovatch serves up regardless of, he said, the quiet "threats." 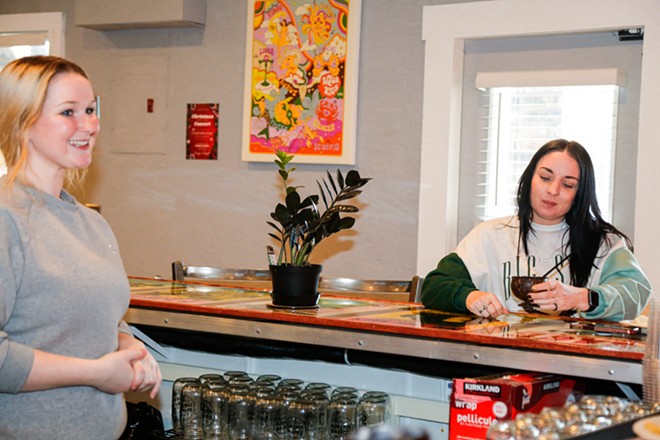 Mark Oprea
Bartender Anya Zurawski and manager Dana McGinty at Sacred Waters on Thursday afternoon. Both are upset over the November moratorium: "I would think that the city I grew up in would be a little more open to this," McGinty said.

Last Thursday afternoon, Kovatch tended bar for an hour or two in between readying new batches of kratom soda, in Cranberry Passion and Black Cherry Lemonade. Kovatch is generally soft-spoken, but gets riled up when the kava he loves is attacked on a philosophical level. And it seems he's surrounded himself with like-minded bartenders, chefs, and managers that are equally beguiled as to why North Olmsted is picking on them.

"They are making assumptions and judgments from afar," manager Dana McGinty said while eating lunch. "Without, you know, coming in for themselves. Seeing what we're about."

Kovatch poured a shell of Molokai kava, a Sacred Waters speciality "overnighted from Hawaii on dry ice." A warm smile comes over him as he talked about new plans, plans personal and entrepreneurial—one being, say, another Sacred Waters in University Circle.

"Oh, and you know," he added, smiling, "I'm actually in the process of becoming a shaman."