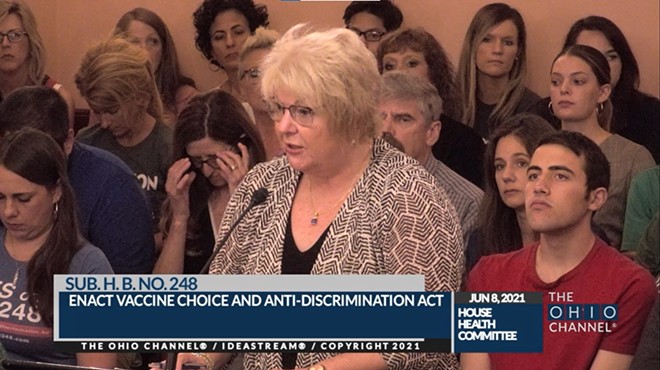 Perhaps from the magnetic forces that she has spoken about at length, a controversial Ohio doctor is being pulled back into the spotlight.

The state medical board of Ohio has launched an investigation into Dr. Sherri Tenpenny, a Cleveland-area doctor who practices osteopathic medicine. If Tenpenny's name sounds familiar, it's because she famously and falsely testified to the Ohio House Health Committee in 2021 that COVID-19 vaccines magnetize their recipients and “interface” with 5G towers. Tenpenny received national attention for her claims, which had been swirling and amplified through far-right channels, despite being debunked repeatedly by epidemiologists and other doctors.

How did we get here?

Public health experts were against Gross' bill, saying that the legislation would suppress Ohio’s vaccination rates against a number of diseases and would increase the likelihood of outbreaks of infectious disease.

At the height of the pandemic, Gross loudly opposed COVID-19 public health protocols, such as mask and vaccination requirements, despite then-emerging science supporting such measures. In one 2021 demonstration, Gross brought a large group of supporters to a donut shop to knowingly ignore the state and local public health policies that were in place at the time, even as local officials pleaded for the public to act and doctors were overwhelmed by the number of COVID-19 patients at medical facilities.

"As a business we should not have to defend ourselves and employees again for something that should never happened,” Holtman's wrote in a social media post after the incident. “Whether you believe in the pandemic, mask wearing, social distancing, or anything along those lines, we 100% have to do what is put in place by any form of government department to run a business.”

Tenpenny is a prominent anti-vaccination advocate deemed “unreliable” by a special master in federal court, who forbade her testimony as an expert witness in an alleged vaccine injury case. She is among the 12 most prolific disseminators of COVID-19 misinformation on social media, according to research from the Center for Countering Digital Hate. An anti-vaccine activist since the 2000s, Tenpenny has called vaccines a “method of mass destruction” and “depopulation;” charges $623 for her “boot camp” to train people how to convince others to refrain from vaccination; and sells her book, Saying No To Vaccines, for $578 on Amazon.

In an interview, Lipps said that he'd warned Gross against Tenpenny testifying in 2021, but the representative“vehemently” overrode his objections.

In a letter to Tenpenny, Ohio's medical board alleges that Tenpenny did not contact the board after an investigator had stopped by her office, left a business card with the receptionist, sent emails and sent multiple certified letters via U.S. Mail. According to the letter, Tenpenny was subpoenaed to appear at the state board office in Columbus in November of last year. The board also alleges that Tenpenny was asked to appear at an "investigative office conference" this summer.

Tenpenny did not follow up with the board or attend any of the appearances, the letter says, which was reported by WEWS.

"By letter dated October 31, 2021, you notified the Board through your legal counsel that you did not believe that the Board had a lawful basis for the deposition and that you would not participate. You failed to appear at the Board Office on November 3, 2021," the state board says about the November incident. The letter states that Tenpenny and her attorney shared similar reasons for not attending the July 26 appearance.

Tenpenny's actions constitute "failure to cooperate in an investigation conducted by the board," according to the letter, and the state medical board is now considering "whether or not to limit, revoke, permanently revoke, suspend, refuse to grant or register or issue the license/certificate for which you have a pending application" or to "refuse to renew or reinstate your license or certificate to practice osteopathic medicine and surgery, or to reprimand you or place you on probation."

The doctor may owe financial penalties for her actions, the board says.

"Furthermore, for any violations that occurred on or after September 29, 2015, the Board may impose a civil penalty in an amount that shall not exceed twenty thousand dollars, pursuant to Section 4731.225, Ohio Revised Code," the board writes in its letter. "The civil penalty may be in addition to any other action the Board may take under section 4731.22, Ohio Revised Code."