The pastor also rallied House members against the "rulers of darkness." 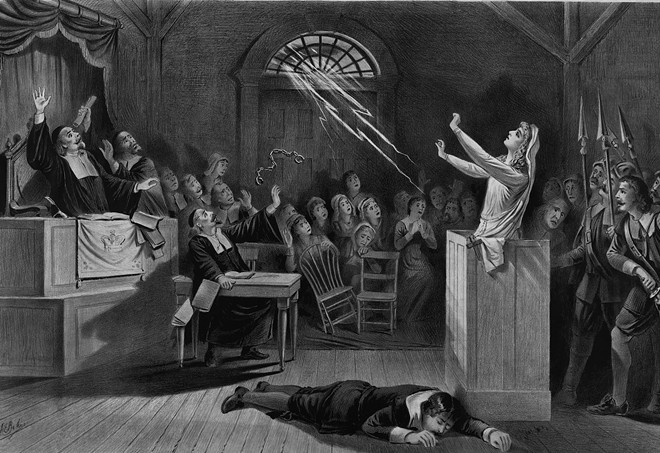 
Halloween may be over, but House Rep. Jennifer Gross from West Chester still is focused on casting “witchcraft” out of the Ohio Statehouse.

At the start of a chamber session on Dec. 1, Gross introduced Curtis Hill, an associate pastor at LifeChurch in West Chester, to lead the assembly in prayer. Prayer – frequently Christian – typically kicks off sessions at the Ohio House of Representatives and is followed by the Pledge of Allegiance, but this invocation had a twist.

“Curtis is an emerging prophetic voice in his generation. He empowers believers to think differently and consider the spiritual implications of world events as the heavenly realm influences them,” Gross, a Republican, told the assembly as she welcomed her guest to the lectern.

Hill proceeded to pray over the Ohio House with vigor. “We submit this house to the rulership of King Jesus," Hill said. "Jesus, you were given the nations as your inheritance, and I thank you that you continue to let us steward this Earth and govern your people in liberty and freedom."

"I thank you for every member of this House who has made the necessary sacrifices in order to follow the holy calling of creating laws that protect the freedom that was given by you, Jesus. For where the spirit of the Lord is, there is freedom," Hill said, possibly pointing only to (Christian) religious freedom but not to the freedom to have agency over one's own body or the freedom to feel reasonably safe that someone won't kill you with a deadly communicable virus or with guns.

Hill then rallied the House members against the "rulers of darkness."

"We dedicate this House to you and your righteousness and your holiness and we come against every principality, power, ideology and doctrine that attempts to raise itself above the knowledge of you, Jesus, and we cast them down," Hill said, seemingly placing all non-Christian religions and spiritual traditions on a lower plane within a space for public governance. "God, I pray that you keep us from engaging in battle with each other, but that we would only battle against these principalities and rulers of darkness."

And that's the moment when Hill renounced witchcraft on behalf of all House members, regardless if they asked for it or not.

"According to the authority of those who have been given Christ Jesus, I bind every foul spirit that is attempting to influence anyone who works in this space, specifically any spirit of control, manipulation, fear, apathy, harassment, prejudice, malice, perversion, any and all witchcraft, divisiveness, deceit, corruption," Hill said in a long list of things he wanted to cast out.

Hill proceeded to thank the Christian God for the "angels that are stationed and camped around this House."

Naturally, Twitter reacted to the sermon – particularly women, a group that over centuries had been burned, stoned or locked up for being "witches."

Gross apparently has been very worried about bad spirits in the statehouse. "If your legislator is not 1st and foremost following Jesus Christ, then where is the wisdom coming from? Could it possibly be coming from God or is it coming from the Lord of the air- THE DEVIL?" one Twitter user reports Gross as saying on Nov. 28.

CityBeat reached out to Gross for comment but did not hear back by press time. Hill's invocation and the entire House session is available on the Ohio Channel.
Jennifer Gross' quackery in the Statehouse

Gross has a history of questionable or performative episodes in the House chamber, particularly when it comes to certain "freedoms." House Health Committee chairman Scott Lipps, a Republican, said in an interview that Gross had personally requested that Dr. Sherri Tenpenny of Cleveland testify in 2021 supporting Gross’ bill, the “Vaccine Choice and Anti-Discrimination Act.” The sub bill for HB 248 would "prohibit mandatory vaccinations, vaccination status disclosures, and certain other actions regarding vaccinations."

Public health experts were against Gross' bill, saying that the legislation would suppress Ohio’s vaccination rates against a number of diseases and would increase the likelihood of outbreaks of infectious disease.

At Gross' behest, Tenpenny famously and falsely testified to the Ohio House Health Committee in 2021 that COVID-19 vaccines magnetize their recipients and “interface” with 5G towers. Tenpenny received national attention for her claims, which had been swirling and amplified through far-right channels, despite being debunked repeatedly by epidemiologists and other doctors. She is a prominent anti-vaccination advocate deemed “unreliable” by a special master in federal court, who forbade her testimony as an expert witness in an alleged vaccine injury case. Tenpenny is among the 12 most prolific disseminators of COVID-19 misinformation on social media, according to research from the Center for Countering Digital Hate.

The state medical board launched an investigation into Tenpenny in November.