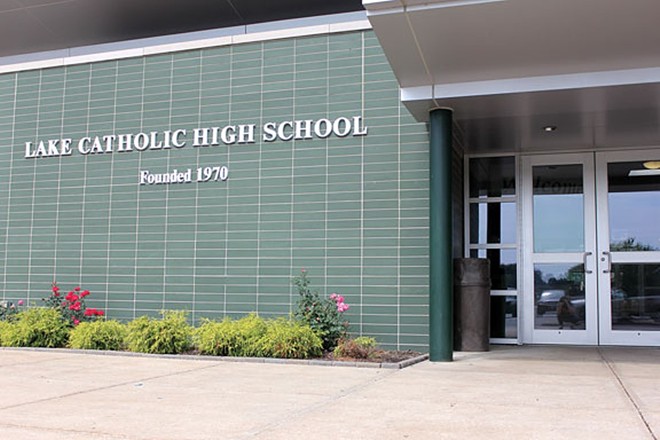 The head coach and assistant coach of the Lake Catholic High School lacrosse team have resigned and students must participate in programming at the Maltz Museum of Jewish Heritage in order to receive their transcripts after a swastika appeared on the calf of a player during last week's playoff game against Orange High School.

Lake Catholic, in Mentor, is one of five high schools under the administrative umbrella of the Cleveland Catholic Diocese. Cleveland Central Catholic, Elyria Catholic, Holy Name and VASJ are the others.

In a joint statement Wednesday, the Diocese and Lake Catholic released findings from their investigation into the swastika incident.

"The swastika is the most notorious symbol of antisemitism and hate more broadly, and its appearance was both shocking and appalling," the statement read. "The Diocese of Cleveland and Lake Catholic High School condemn anti-Semitism in all forms, and we extend our most sincere apologies to the Orange High School community and to all Jewish and non-Jewish community members alike for the hurt that has resulted from this incident."

According to the investigation, a Lake Catholic player, in an attempt to "play a prank" on his teammates, drew a swastika on his hand in eye black and then pressed his hand onto the arms of two of his teammates and the calf of another. The two players with the swastika on their arms noticed the symbols before the game and managed to wash them off. But the player with the symbol on his calf did not see it, according to the investigation, and didn't remove it until it was brought to his attention during the game. The Lake Catholic players huddled together to remove the swastika during the third quarter, according to an Orange High School student photographer.

A letter to the community from Orange High School Superintendent Dr. Lynn Campbell noted in the wake of the incident that alumni and parents at the game had reported a Lake Catholic fan using racist slurs toward the Orange team.

The Diocese's fact-finding efforts were unable to  substantiate these accounts, but they did find that an adult associated with Lake Catholic who was serving as the team's photographer uttered "coarse and profane language" in interactions with Orange High School fans.

That adult has now been banned from participating in official team activities, per the Diocesan statement. The player responsible for the prank has reportedly expressed sorrow for his actions. He was prohibited from participating in Lake Catholic's commencement activities and will not be allowed to receive his diploma and transcript until he completes a program of community service designed by the school.

Additionally, "the entire 2022 lacrosse team will be required to attend a program developed by the Maltz Museum of Jewish Heritage in the coming weeks," the statement read. "The program will include both instructive and restorative elements."

WKYC, Cleveland.com and others reported that Head Lacrosse Coach Chris Hastings, who was not a Lake Catholic teacher and who didn't arrive at the game until midway through the first quarter, has resigned. The assistant coach has resigned as well.