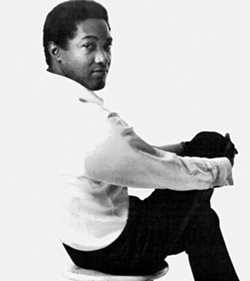 Wikipedia
Andrea Cooke, the granddaughter of soul singer Sam Cooke and a resident of Euclid, is currently duking it out in Cuyahoga County courts for the portions of her grandfather's royalties that were duly bequeathed to her. Currently, attorney Carl McMahon is in control of the money.

At issue: In 2008, McMahon and estate accountant John Silvaggio urged Andrea Cooke to set up a trust that would protect the income — a "trust that would provide income for life to [Cooke] and the residual to her daughter," according to one of the lawsuits. Cooke, now 32, came into the money when her mother died in 2009. At the time, she was unemployed, subsisting on SNAP benefits and the extent of an 11th-grade education. The administrators of Sam Cooke's estate encouraged the creation of a trust fund that could be managed professionally and neutrally. Seven years later, that hasn't worked out for her, she argues.

Independence-based attorney Mark Sutula drafted the trust agreement, which Cooke later signed off on. (Sutula and McMahon share an address on Brecksville Road.)

As Cooke's lawyers argue: "[She] was given copy of the Trust Agreement and told to review the terms and write any questions that she had in the margins.. [Cooke] attempted to review its terms to the best of her ability, but lacked the training or skill to understand its terms or identify relevant issues with such terms." She states that both Sutula and McMahon made it clear during an in-person meeting that she was the beneficiary of the trust.

She was not, and she did not learn about this until 2015.

During the interim, McMahon received royalty payments from the record label. McMahon then paid out the royalties to Cooke — or "on her behalf."

In August 2016, the label decided to halt all royalty payments to the trust, citing unresolved and competing litigation (McMahon's suit against Cooke, and Cooke's suit against Sutula). The label's main argument appears to be the mounting attorney's fees spent to respond to subpoenas, even as it "has no interest in the outcome in the resolution of the dispute."

Once that happened, Cooke's guardian ad litem — the representative who assists "the best interests of the child" in probate court matters — requested that no more payments be given to Cooke.

During all this litigation, the "status quo" has been maintained; Cooke receives $250 each week, as well as cash for her rent payments and bills. More than $30,000 remains in the trust account. (As of September 2016, Cooke is employed with a janitorial services company.)

McMahon requested on Aug. 30 that $25,000 of the remaining funds be set aside for trustee fees that have been incurred "and/or will be incurred."

Judge Laura Gallagher has not yet ruled on those latest requests, though the label has indeed halted all royalty payments indefinitely.

On Dec. 15, Cooke filed a motion with Gallagher seeking a "limited" release of funds so that she can buy Christmas gifts for her children, who are in the custody of Cuyahoga County Job and Family Services.

Calls to the various attorneys involved in the case have not been returned.