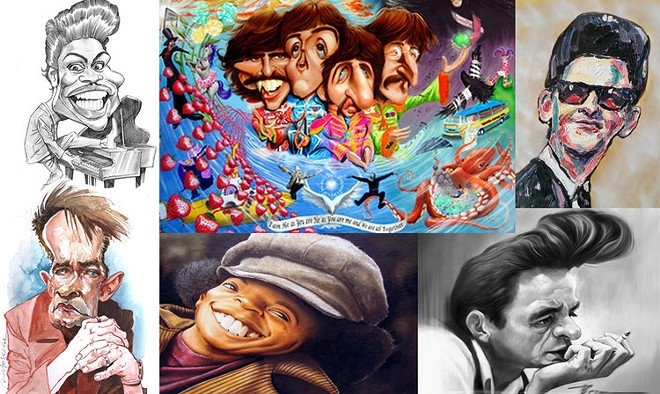 “Sketchbook Heroes: Caricatures of Rock Legends intends to cast a light on a form of art that is often overlooked in the gallery scene,” gallery director Johanna Wilkes and assistant gallery director Hailey Bickett told Scene in a joint statement. “We are excited to have partnered with the International Society of Caricature Artists (ISCA) to call for caricatures of rock and roll bands and musicians through the eras to be shown. We had an excellent response from artists all over the world, including well-known artists as well as emerging artists. We have received artwork of musicians across many eras of rock and roll so this show is sure to bring a smile to a wide range of rock and roll fans.”

The gallery exhibition ranges from seemingly simple cartoon drawings to oil paintings, but each work portrays the calculated exaggeration of not just facial features, but mood, posture, and even color, light and shadow. These exaggerations help convey not only the subject’s visual features, but their personality and unique story. The result is a portrayal with deeper meaning beyond a traditional photograph or portrait. Featured artists include Glen Ferguson, Tom Richmond, Dom Bianchi and Thomas Fluharty. Although many people are familiar with caricature artwork through amusement parks, zoos or special events, many are unfamiliar with the genre, its history or the potential scope of the artform. Organizers hope this exhibition serves as an introduction into a deeper understanding of caricature.

"One of the missions of ISCA is to get people to view caricature in a way they might not have before, and to introduce the art form to those who aren't familiar at all,” says Tom Faraci, secretary of the International Society of Caricature Artists. We've had a long-time goal of hosting a gallery show of some of the industry's top talents, and thanks to Loftworks, that goal is finally coming true. We're thrilled to be involved and hope visitors to the show walk away with a broader understanding of caricature.”

Sketchbook Heroes opens with a reception from 5 to 8 p.m. on Friday, October 6, and remains on view through October 22. The gallery will be selling original artwork, as well as prints and books.