The Alleged Criminal Saga of an All American Bandit from Brunswick

Larry Gore's your go-to Allstate guy in Medina, Ohio. He's got you covered on the things that matter most: your family, your home, your car, your business. Hell, even your boat. "My knowledge and understanding of the people in this community help me provide customers with an outstanding level of service," Gore's Allstate page attests. "I can help you prepare a strategy to achieve your financial goals."

Not exactly a practice-what-you-preach guy, though, Larry Gore — that is, if you're inclined to believe the cops. Or the neighborhood rumors, for that matter. Just today, Gore's strategy to achieve his own financial goals took a discouraging turn. You might say the strategy collapsed, or that it imploded, or that it ran its natural course. But whatever it did, Gore's got a chance, twiddling his thumbs in the Medina County Sheriff's Office, to mull it over.

It's been an unseasonably chilly few days down here in Cleveland's deep southern suburbs, but the interview room where Gore's now being held has to feel colder and more sterile than anyplace outdoors in Brunswick, where he lives, or Medina, where he works, or Valley City or Columbia Station, where he is alleged to have robbed banks.

Gore was pulled over more than an hour ago in Brunswick Hills and arrested on the spot by a detective sergeant with the Medina County Sheriff's Office. He was taken into custody right away and has been sitting here for half an hour. It's not until 12:09 p.m. that detectives James Cartwright of Medina County, James Rico of Lorain County, and Mary Gross of Medina arrive and start probing him for information. 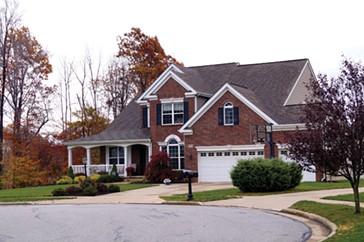 "This is the room where everything I say is used against me," Gore chides them, familiar with his rights. And even though in some ways he wants to unburden himself — to find, even here, a sympathetic ear ­— he won't disclose all the details the detectives are after. Not about this morning's robbery at the FirstMerit Bank on Royalton Road in Columbia Station, and not about three other robberies in 2014 that he's suspected of as well.

At least not right away, he won't.

"I think from here on out," Gore advises his interrogators early on, "I need to talk to a lawyer."

That's a prudent request — though its legal ambiguity would be debated in pre-trial motions — and one should expect nothing less from an insurance agent of Gore's caliber and cred. But not even Allstate's Mayhem Man (a suddenly relevant, if cruelly ironic, mascot) can protect Larry Gore from a hankering to talk. One senses he's been dealing with a tremendous amount of stress.

And who wouldn't, with a juggernaut mortgage to fend off (he lives in the nicest home in Brunswick's Waite Farms development; price tag: $361,000); mounting college tuition to cough up; an insurance business to sustain; and, at 47 years old, an archetypal image (the All-American family man, the golden suburban dad) to uphold?

Detectives Cartwright, Rico and Gross know there's nothing more they can do once Gore has invoked his right to an attorney. They stand to leave the interview room, but at the door Mary Gross turns back and offers a kind of condolence.

"If you have any questions for us, we'll answer them the best we can," she says. "We know you're not a bad guy."

Larry Gore killed the engine of his black Honda Accord in the parking lot of the freestanding Medina FirstMerit on State Route 3, Court Street. It was late morning, and the sun was out and warm. This particular branch was only five minutes south from his AllState franchise in the plaza on West Liberty Street and was secluded from the miniature bustle of downtown Medina. It was certainly a safer bet, as far as robberies go, than the branch up the street on Medina's Public Square.

Moreover, the Court Street location had drive-through teller service on the back side, which meant it was seldom crowded indoors: Fewer witnesses. Fewer threats.

Despite the summer heat, the robber (who is believed to be Gore) was dressed — almost parodically — as a cat burglar: dark athletic pants, hooded jacket, blue knit ski cap, sunglasses. The sandy dusting of his facial hair was barely visible in the shadows. He carried no weapon and he did not speak.

At 11:19 a.m., he hopped the 5-foot counter — a spry and driven former athlete, Gore — and compelled the teller to fork over the dough. 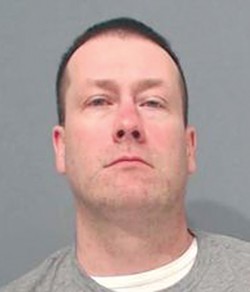 In banking, tellers (almost always bottom-rung employees) are advised to keep only $3,000 to $5,000 in a top working drawer and the balance of their station's currency in a locked second drawer. The theory is that the second-drawer money is immediately available to a teller who might need additional cash but not to the stick-up man.

Gore knew about the second drawer. Prosecutors would later claim that having a relative who'd worked for many years in the banking industry clued him into the terminology. Regardless, he drove away from the FirstMerit with $5,317 in hand. No one was harmed. No one was caught.

"It might be a few minutes," says detective James Cartwright, poking his head into the interview room at the Medina County Sheriff's Office to keep Gore abreast of his processing. "Can I get you a glass of water?"

Cartwright gets the water and returns, asking the seated and handcuffed Gore if he needs help taking a sip.

"No," Gore responds, but he knows he does. Just not with the water. "Hey, can I talk to you for a second?"

Gore's attorney, David Sheldon, would later attempt to have his client's incriminating statements at the sheriff's office deemed inadmissible because he'd already requested an attorney. The prosecution would counter, in back-and-forth pretrial motions, that even if the court were inclined to interpret Gore's requests as unambiguous (which the prosecution sure didn't), Gore's right to communicate through counsel was rescinded the moment he re-initiated conversation with police.

Whether it's admissible or not, Gore begins talking with Cartwright, and detective Gross re-enters the room:

"Everything other than today's robbery is circumstantial," Gore tells them, for example. "You had the GPS tracker. Why didn't you arrest me before?" he wants to know.

"How much time would I be looking at?" he asks.

Gore does periodically say that he ought to speak to an attorney. And at one point, he even references his right to remain silent. But the detectives know he's wobbly, and they capitalize.

"We'd like to recover the clothing that was worn in the robberies," Cartwright mentions.

"What if that stuff happened to be destroyed?"