How a Hillbilly Superstar Becomes the Thing He Once Loathed 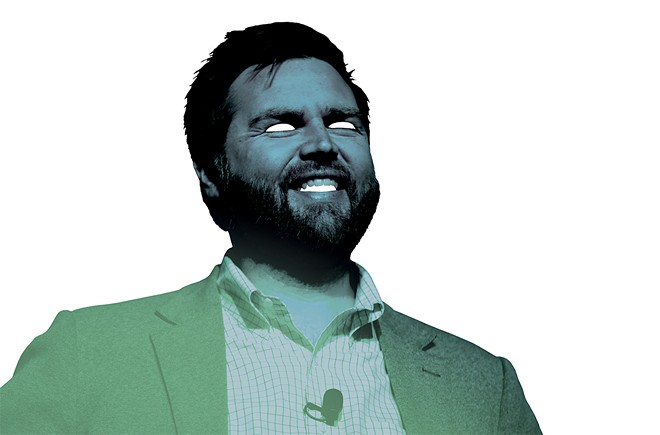 The debasement of J.D. Vance was complete.

Only a few short years before, he was a celebrated author and San Francisco venture capitalist, spending Saturday mornings volunteering at the community garden before he and his neighbors dispersed to “art gallery tours” and “day trips to wine country,” as he once put it. Now he was headlining a freak show in Youngstown.

For the past year, J.D. served as their understudy, learning how to say or do anything to plant himself within the 24-hour outrage cycle. But on this Saturday night, the true headliner was Donald Trump.

The former president was spending his golden years as a one-man jobs program for defense lawyers. Hoping to win the great man’s affections, J.D. had stuffed his self-respect in his pocket and remade himself as a culture warrior.

Yet Trump is a cruel master. He demanded servility from his yes-men, then belittled them for their weakness in doing so. He couldn’t resist mocking J.D. for the toady he’d become.

“J.D. is kissing my ass he wants my support so bad,” Trump announced to the crowd.

Still, it was a calculated play. Rebranding oneself as a mean-ass redneck was a tried and tested path to the U.S. Senate. Ted Cruz (Princeton and Harvard) and Josh Hawley (Stanford and Yale) crawled through the same back door. The downside: possessing the authenticity of a $10 Rolex had a way of inviting ridicule.

“What makes Vance so awful is that he knows better,” wrote The Atlantic’s Tom Nichols. “His intentional distancing from his earlier views shows that he is fully cognizant of what a gigantic fraud he’s become.”

Trump, the impresario of fraud, was simply mocking a lesser practitioner.
“He made J.D. Vance look like a mouse, not a man,” former Republican Congresswoman Barbara Comstock told CNN. “It was humiliating.”

This was supposed to be a tale of poor boy makes good. For a time it was.

In 2016, J.D. authored Hillbilly Elegy – part memoir of his hard luck youth in Middletown, Ohio, part critique of the angry white countryside that so baffled the coastal intelligentsia.

He explained the despair of a declining heartland, the punishing capitalism that brought it to waste. Yet J.D. didn’t hesitate to note how many of these wounds were self-inflicted. From dope to laziness, chronic victimhood to suckling on the government teat, rural whitey brought this on himself.

It was a tour de force of tough love and personal responsibility. J.D., a son of these lands, had the bona fides to pull it off.

Critics were smitten. “You will not read a more important book about America this year,” gushed The Economist. The Washington Post called him the “voice of the Rust Belt.” J.D. became the nation’s leading authority on Crackerland, with a regular gig on CNN.

No one seemed to notice how all this collided with his day job.

After Yale, J.D. did a stint in corporate law, then headed for the real money: venture capital.

It’s a simple racket, much like playing the ponies. You invest in a series of longshot startups, knowing most will come up lame. The idea is that one will eventually hit, swiftly rise to corner a new market, then use that clout to crush any competitor – or simply buy them out.

It’s an essential nutrient in the concentration of U.S. wealth, whereby a select few companies gobble up entire sectors of the economy, leaving little to spare for places like Middletown.

J.D.’s mentor was Peter Thiel, an unusual species in Silicon Valley: a gay libertarian and sugar daddy to the extreme right. Thiel pumped tens of millions into candidates who bashed immigrants and pumped the fraud of voter fraud.

They tended to make willing vassals in a far more important mission: deregulation and a pro-corporate judiciary. If Goliath could simply do as he pleased, imagine how much greater that gobbling could be.

There is no better platform from which to pontificate than the U.S. Senate. But getting there meant appealing to a much tougher crowd than Georgetown punditocracy. J.D. had to win the hearts of pissed-off white men, the soul of the Republican Party. This could not be done with day trips to wine country.

“I never wanted to be a public intellectual or a talking head,” he told The Washington Post. “I actually care about solving some of these things.”

So he returned to Ohio, debuting another tried and tested racket: the fake charity.

Publicly, Our Ohio Renewal would combat the opioid epidemic. Privately, it would hold a higher purpose: nursing the ambitions of J.D. Vance.

Most of the money was spent on a political advisor and polling. When he did deign to combat opioids, he hired a doctor with ties to Purdue Pharma, the maker of Oxycontin. She just happened to have a history of downplaying pharma’s role in the crisis, as coincidence would have it.

If politics is the art of empty gestures, J.D. was proving himself a prodigy.

He also launched Narya, a Cincinnati venture firm. The idea was to bring the magic of Silicon Valley to the beaten hordes of the Heartland.

Though conservatives are known for doing their own research, scrutinizing J.D.’s investments wasn’t atop their list. They might be surprised to learn of his holdings in Acretrader, a company gobbling up farmland. For the low, low price of $16,290, you too can get a piece of a soybean farm in Redwood City, Minnesota. Or Vermilion County, Illinois. Or Worth County, Iowa.

Because there’s nothing better for the economy than absentee landlords buying up your neighbors.

Believe it or not, caring about things like LGBTQ+ rights and the environment is all the rage in executive suites. It’s as much pragmatic as it is altruistic. Customers demand it — especially urbanites, who carry far more economic clout than their country brethren. CEOs have also experienced a Come to Jesus moment on the environment. They know that hurricanes, typhoons, flooding, and drought will soon have the same impact on business that the pandemic did.

It was one thing to cuddle with climate deniers when your earnings went untouched. It’s quite another to see your Taiwanese plant crushed by a tropical cyclone.

Strive Asset Management battles against such nonsense “with the sole interest of maximizing value,” not some “divisive social and political agendas that most Americans disagree with.”

You can practically hear the people of Middletown cheering it on. “Finally! An investment firm stripped of any sense of humanity!”

There remained a small bar to J.D.’s appointment with destiny. Back when he was still J.D. Vance: White Trash Whisperer, he’d thrashed Trump for the buffoon he is, calling him an “idiot” and an opioid offering “easy escape from the pain” to racists and part-time Christians. Only belatedly did he discover this wasn’t the best way to win a Republican primary.

J.D.’s new mission: bury his integrity to earn Trump’s grace. So began the greatest exhibition of ass-kissing in Buckeye history.

He assailed “scumbags'' and “elites,” claimed that “professors are the enemy,” and railed against the “corrupt.” Close your eyes, and you’d think you were listening to Josh Mandel, Ohio’s previous record holder for personal abasement. If it wasn’t so painful to watch, it would have been nice to include a laugh track.

Yet his vitriol felt mechanical, stilted. The captain of the debate team was trying to play the 8th grade bully. Take his tweet on an upcoming trip to New York, in which J.D. pretended to face a harrowing journey:

“Serious question. I have to go to New York soon and I’m trying to figure out where to stay. I have heard it’s disgusting and violent there. But is it like Walking Dead Season 1 or Season 4?”

Intended reaction: “J.D. watches lots of TV, just like me! And he’s scared of big cities! Just like me!”

Fortunately, Trump is not a nuanced man. Novice actors routinely flew to Florida to audition for his favor. What mattered was that J.D. was kissing ass. With gusto.

“He said some bad things about me, but that was before he knew me,” Trump reflected on that night in Youngstown. “And then he fell in love."

To be a strong conservative is to speak the hard truths. To show that you’re bravely heartless, a leader for our times.

He lashed at Ukraine: “I don’t really care what happens to Ukraine one way or the other,” he declared. The real fight was with the Mexican trimming your hedges.

He denounced divorcees who "shift spouses like they change their underwear," women who flee “even violent” marriages, libs who have no “personal stake” in America because they don’t have kids.

His best work involved White Replacement Theory. It’s a fictional saga in which libs purposely leave our borders unguarded, brown foreigners invade to breed like rabbits, and white dominance is lost to history.

J.D. knows there are votes to be had in igniting racial fear. “Race is definitely a part of the Trump phenomenon,” he once told PBS Newshour. But he’s positively outraged at any suggestion he’s sucking up to the GOP’s Klan faction.

When working white men “dare to complain about the southern border, or about jobs getting shipped overseas, what do they get called?” he recently asked Tucker Carlson. “They get called racists. They get called bigots, xenophobes, or idiots.”

Which leads us to J.D.’s latest iteration: professional victim.

Come to Think of it, Personal Responsibility is Way Overrated

The apostle of personal responsibility is dead. The Republican Party has never been big on self-reflection. Its specialty is raking the room, shooting at everyone else to blame.

Go to J.D.’s campaign site, and you’ll find the blame game played at festival proportions. There’s no talk of the lazy white man improving himself. Instead, he offers a list of excuses under which to take shelter.

He doesn’t have much to say on how he’ll improve their lot. He’ll be “fighting,” of course. Keeping women from abortions. Barring kids from learning our history. Halting the use of our military “as a social justice side project.”

But it’s all very vague. Specifics can wait until he reaches the Senate. Or not.

None of this has made him very popular, oddly enough. His election should have been a cakewalk. Though Ohio has yet to become North Mississippi, it isn’t for lack of trying.

Party bosses accuse him of running a lazy campaign. Of preferring to rub elbows with big shots back east, rather than the throngs at the Coshocton County Fair.

While the rank-and-file might cotton to a show pony like Jim Jordan, they sense an emptiness in J.D. He believes in nothing. Stands for nothing. Wait a week, and he might be doing a Bernie Sanders impression if he thinks it will get him elected.

Yet a man so willing to torch his self-respect should not be underestimated. The new J.D. is still under renovation. His acting will improve. And with no soul to weigh him down, his options are limitless.