UPDATE: Two of the Worst COVID-19 Outbreaks at Ohio Elder Care Facilities are in Parma 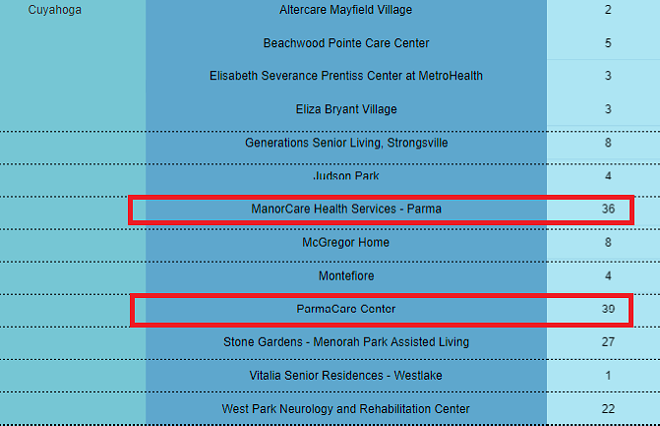 Coronavirus.ohio.gov
Two elder care facilities in Parma are among the most serious hot spots for the spread of coronavirus in the state of Ohio, according to data released Wednesday night by the Ohio Department of Health.

Cuyahoga County's 163 confirmed cases is by far the most in Ohio. Other than the two Parma locations, the Stone Gardens Assisted Living Facility and the West Park Neurology and Rehabilitation Center both have more than 20 confirmed cases as well.

In a horrifying story published in the New York Times, an anonymous tip brought police to a long-term care facility in New Jersey, where 17 bodies were found, a fraction of the 68 deaths due to COVID-19 there.

Nursing homes, in New York and across the country, are particularly susceptible to the spread of COVID-19. That's not only because of the aging and frail resident population, but because of a lack of personal protective equipment and staff shortages.

In Summit County, nearly half of the confirmed deaths are now attributed to a single retirement community.

A spokesperson for Ohio Living Rockynol confirmed Wednesday that seven residents of the Akron retirement community have died from COVID-19 infections. That number is nearly half of Summit County’s 15 confirmed deaths from the coronavirus as of Wednesday. https://t.co/djPacj7ZQi