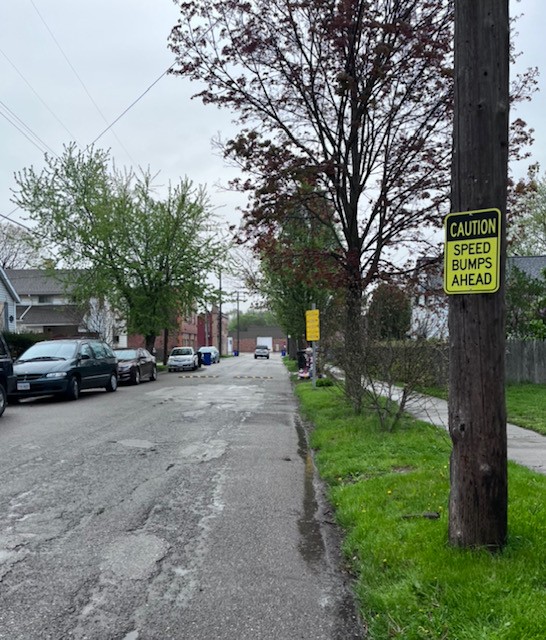 Thursday night, a team of tactical urbanist guerillas, in partnership with residents in the Clark-Fulton and Stockyards neighborhoods, installed speed bumps and a caution sign on W. 50th Street south of Clark Avenue, at the site where five-year-old Congolese refugee Apoline Asumani was struck and killed by a reckless driver last month.

Unwilling to wait any longer for physical traffic calming measures or legislation to codify safer street design, those who installed the speed bumps did so to make drivers slow down on a street where children play. But they also did it to send a message to city leaders, to publicize their impatience and to demonstrate that  interventions to create safer streets can be low-cost and straightforward to implement.

The delays have become unconscionable for some pedestrian safety activists and for people who live in residential neighborhoods where children are regularly killed by speeding people in cars.

"The fact that we are willing to spend our own money on this speed bump and not wait for the city shows just how important we think it is," said one of the urbanist guerrillas, who requested anonymity. "Mayor Bibb said 'People over Cars' but so far I have not seen that in action."

The portion of W. 50th Street falls in the far southwestern corner of Councilman Kerry McCormack's Ward 3. McCormack has been the most vocal city legislator in calling for pedestrian safety. It was he who agitated in recent budget hearings for an additional allocation of city dollars toward "Vision Zero," the effort to eliminate traffic fatalities.  And alongside Mayor Bibb, he has sponsored the "Complete and Green Streets" ordinance, which aims to make city streets safer for all users, including cyclists and pedestrians. That ordinance, in fact, appeared before the Cleveland Planning Commission Friday morning. 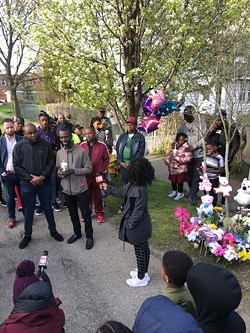 Sam Allard / Scene
A vigil on W. 50th for Apolina Asumani, Councilman Kerry McCormack stands behind Mayele Ngemba, leader of the Cleveland Congolese community.
McCormack spoke briefly at a vigil for Apoline Asumani last week and alluded to these legislative efforts. He said that after meeting with Apoline's family in the wake of the tragedy, he'd heard the message loud and clear that the city needs to take action to make streets safer.

"It's a truly horrifying situation," he said, "but this legislation is the sort of thing we need to ensure that it doesn't happen again. My name is on that legislation, and I think we should name it after Apoline. I'm sending my thoughts and prayers to the family, but I'm also making a commitment. I know people are sick and tired of speeding drivers across the city."

An elder in the local Congolese community spoke passionately after McCormack. Speaking in Swahili with translation provided by Mayele Ngemba, the community's local leader, the elder said he couldn't believe the government hadn't acted already.

"Every time I look at that picture [of Apoline], I feel like I am going crazy," he said. "If this had been in Africa, it would be a very different story."

The neighbors who gathered at the vigil and offered words of condolence remarked upon the diverse and welcoming community they'd worked hard to create in their corner of the city, one that has become home to immigrants and refugees and one where children play up and down the street and in the yards of neighbors. To them, speeding drivers have long been a menace.

The anger and impatience on W. 50th was reflected in the comments of the guerrillas, who installed the speed bumps with the neighbors' blessing Wednesday night.

"I know things take time," one of the guerrillas told Scene, "but as Mayor Bibb said, 'Cleveland can't wait.' Apoline couldn't wait, and neither can any other Cleveland kid or pedestrian. If the city comes to take away [the speed bump] without replacing it with something even better, it will show where the city's priorities are."

Jacob Van Sickle, the director of Bike Cleveland, told Scene he had been made aware of the efforts on W. 50th Street. He was unable to speak by phone — he was preparing to testify at the Planning Commission — but sent a written statement on behalf of Bike Cleveland.

"While Bike Cleveland would prefer that these traffic calming measures be installed by the city and approved through the proper channels, we certainly understand the frustration in the community and the urgent need for intervention. Our thoughts are with the Asumani family, neighbors, and the Congolese community.

"Bike Cleveland believes that action needs to be taken immediately city-wide to address the safety of its residents and its streets. We encourage the city to respond by expediting the passage of an updated Complete & Green Streets Ordinance, including a residential traffic calming program. We also ask that the city not remove the speed hump in hopes that it brings some peace of mind to the family of Apoline and the children on W. 50th street – they deserve peace and safety."

Mayele Ngemba was testifying at the Planning Commission Friday morning as well. But he posted a message on Twitter Thursday night expressing gratitude for those who installed the speed bump.

"This will slow down drivers and lives will be saved," he wrote.


This is what happens when residents are tired of waiting for the city to make our street safe. This will slow down drivers and lives will be saved..kudos to whoever installed these speed bumps in memory of Apoline Asumani #MoreSpeedBumpsNeeded#FlyHighApolineAsumani
#CleW50th pic.twitter.com/i7OjZZSzaK