Who Thought Dressing Up Horses Like "Ghosts" for Halloween in Lake County Was a Good Idea?

"There was no intention to be insensitive," says Sheriff 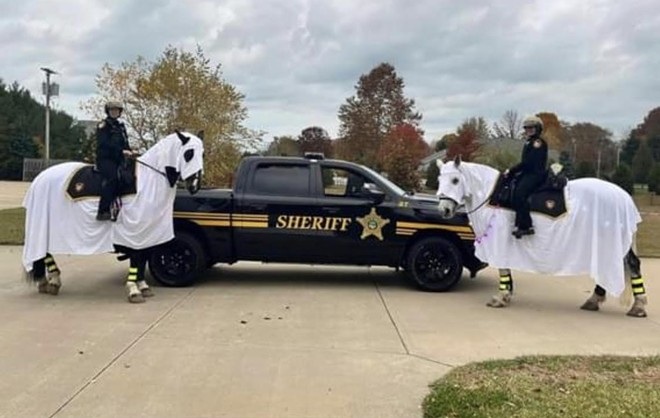 The Sheriff's Department in Lake County has removed social media posts featuring images of the horses in its mounted unit dressed up as "ghosts" for Halloween. A number of residents promptly noted in the replies that the horses' costumes bore a striking resemblance to the cloaks worn by horses of the Ku Klux Klan.

When reached for comment by Scene, Lake County Sheriff Frank Leonbruno said the costumes were "never meant to be insensitive," and that the horses were also bedecked in orange Halloween lights.

"When they were lit up at night you could see they were all about Halloween and intended to be ghost horses walking down the street with the trick-or-treaters," he said.

Leonbruno said that the reaction by the community in person (and on social media) was largely positive, but that a small percentage likened the costumes to the KKK.

"Since this was never our intention, we took down the posting so such misperceptions would not continue," he said.

Leonbruno said that horses dressing up as ghosts for Halloween was relatively common. He even invited Scene to scan the internet for images of such costumes available for sale. He stressed once again that the "ghost horses" were not meant to offend.

"There was no intention to be insensitive to people and their misperceptions of what the horses represented, and for this we apologize," he said.