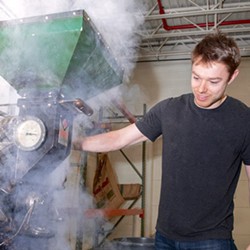 The blend of Peruvian and Sumatra coffees, which Delly reportedly helped craft himself, will retail for $13.50 per pound and will be sold at 40 retail locations including Heinen's, Zagara's and A.J. Rocco's (owned by local entrepreneur Brendan Walton, who also owns the Cleveland Coffee Company and who approached Delly last year about the partnership).

“During one of the Cavs playoff games last year, I noticed that coffee was Delly’s drink of choice," said Walton, in a Cleveland Coffee Company press release. "So I approached him with the idea of branding his own coffee. He came out to our warehouse to learn about roasting and sampled a variety of coffees to create his own blend."

Scene reported on the partnership earlier this month.

Ten percent of all proceeds will be donated to Cleveland's All Faiths Pantry, a non-profit that home delivers groceries to folks who struggle to get around.

The Monday debut — January 25 — is significant because the Cavs will celebrate "Australia Day" at the Q tonight for their game against the Minnesota Timberwolves.