If Bud Light Had Any Sense of Showmanship, the Victory Fridges Would be Stocked with Bud Light Orange 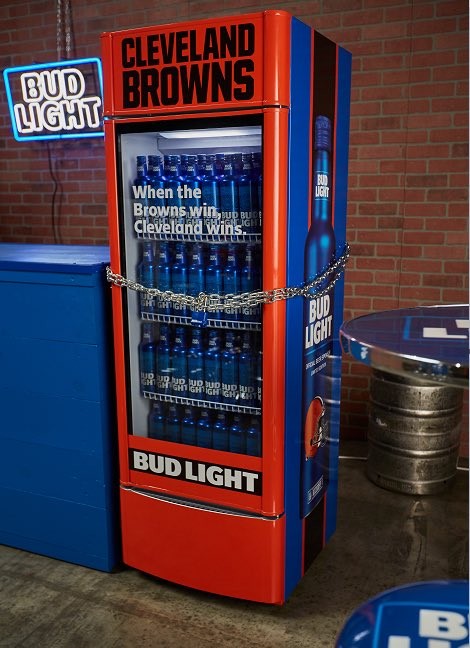 The marketing folks at Bud Light are savvy. There's no denying it. They've been the finest commercial writers in the beverage sphere since the days of "Dad you're my dad, and I love you man..." And lately, they've been on the cutting-edge of extravagant promotions — remember  "Whatever, USA," where the only (frankly ominous) requirement for citizenship was being up for whatever? Last year, they managed to make "Dilly Dilly" an infuriating staple of the professional sports' fan's lexicon.

Bud Light's parent company — Anheuser Busch InBev, based in Germany — pays a pretty penny for all this exposure and commercial dominance. Among other things, it ponied up $1.4 billion to be the official beer of the NFL until 2022. So they're not afraid to shell out big bucks to maintain and grow a customer base with an increasing array of alcoholic options.

Into Cleveland, then, this marketing behemoth descends. The news this morning is that Bud Light has installed, or is in the process of installing, "victory fridges" at First Energy Stadium and at area bars. Bud Light won't say where specifically, but these fridges, each full of ~200 16-oz aluminum Bud Lights — will likely be placed at locations in the city and in the suburbs. Executives were inspired and/or summoned, they claimed, by all the "Dilly Dilly" signs at Cleveland Browns games last year. Cool.

But before you get too excited about these fridges and do Bud Light's promotional work for them, rest assured that there won't be many of them. There are only "about 10" fridges total, and a handful are going to be at the stadium, so it's not like they'll be humming and seductively glowing in the corner of every bar you stumble into on Game Day. But the gist is, they'll be automatically unlocked — via smart technology! — when the Browns secure their first win. That's the gimmick. Free Beer for a long-suffering fan base from our friends at Bud Light. Dilly Dilly!

Free beer is free beer — and Bud Light is surely wise enough to know about Cleveland's unique history with beer promotions, which doubles as a convenient defense for not peppering the city with more of the fridges — but don't go thinking that Bud Light and its corporate parent are soulful community partners who just want to do something nice for a tortured fan base on an upswing.

It's not like AnheuserBusch InBev has our best interests at heart. This is cute, but it's intended to make better customers out of Cleveland fans, and it's the smallest of potatoes for a corporation that boasts seven of the world's 10 most popular beer brands and has, in its portfolio, 19 products that each generate more than $1 billion in annual sales, according to InBev's 2017 annual report which by the way makes for scintillating fireside reading.

And are we to assume, it now occurs to ask, that when the fridges are unlocked — via the sort of smart technology that requires an old-school heavy-duty lock and chain? — that patrons, booze-addled in victory, will proceed to form an orderly line for an opportunity to claim one of 200 beers at, just for example, the Eastlake Two Bucks?

Besides, if Bud Light had any sense of showmanship at all, these fridges would be filled with — or at least interspersed with — Bud Light Orange, for obvious reasons. Though for all we know, Bud Light Orange sucks. We haven't had the pleasure, though for the record we're perfectly happy to enjoy a Bud Light Lime whenever they're on special. In any case, here is a link to Cleveland's Brewery Passport program.

Oddly enough, this is not the only hot bit of Browns-related beverage news this morning.