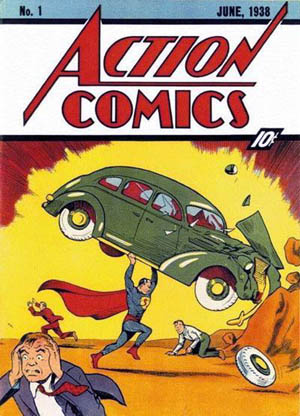 Sci-fi/fantasy royalty appear at this weekend’s Screaming Tiki Supercon — a comics, toys and pop culture convention — which will honor Jerry Siegel and Joe Shuster, creators of Superman, Cleveland’s greatest contribution to the genre. All weekend, the inaugural event will examine Superman, his Rustbelt roots and his myriad interpretations. One highlight will be the ribbon-cutting at Siegel’s one-time house (10622 Kimberly Ave.), where the writer created Superman. The Siegel and Shuster Society formed a year and a half ago, rallying around the decaying Glenville home. The local founders were soon joined by fans from around the world, including novelist/comics author Brad Meltzer, who spearheaded an eBay auction of original art that raised over $100,000 for the house’s renovation. “Our interest is to commemorate and celebrate the creativity of Siegel and Shuster,” says society president Dick Pace. “At the time, they were two young kids who created this concept, and in time, it became world famous. So we want to bring some credit back to Cleveland.” Scheduled for 10 a.m. Saturday, July 11, the ceremony will be attended by members of Siegel and Shuster’s families, including Siegel’s widow, Joanne Carter Siegel, who inspired the Lois Lane character. The families will proceed to the Screaming Tiki Con, where they’ll participate in the first Siegel-Shuster family panel, discussing the creators’ complicated relationships with their creation. Also at the three-day convention will be actor-director Edward James Olmos, best known as Admiral William Adama in the re-imagined Battlestar Galactica series. Star Wars actors Ray Park (Darth Maul) and Daniel Logan (young Boba Fett, Episode II) will participate in a Star Wars panel. Visit screamingtikicon.com for a full roster, which includes the Batcopter, Marvel and DC Comics artists, Cleveland’s Thom Zahler and Buck Rogers hottie Erin Gray. Screaming Tiki Supercon runs Friday through Sunday at the Halle Building (1228 Euclid Ave.). Tickets: $20 one-day, $30 weekend pass includes Ingenuity Festival admission, kids under 12 free with adult. — D.X. Ferris