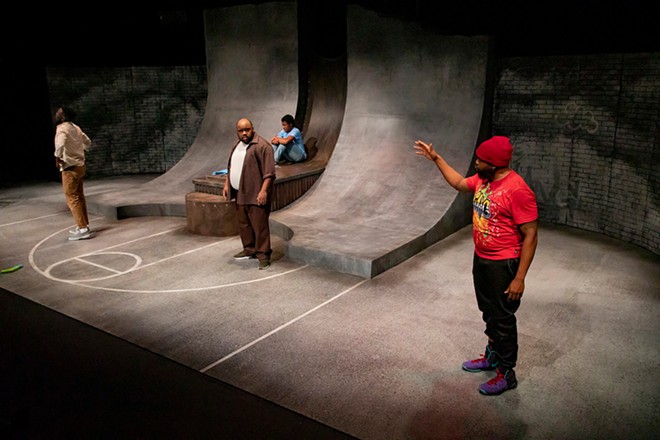 When most people die they are mourned, and the world moves on. But Black men and women who have lost their lives due to police brutality are in a different category. Their names are prayers spoken by those who still have breath, in the hope—no, in the insistence—that change must happen now.

In the compelling and yet sometimes amusing play Kill Move Paradise by James Ijames, we encounter four Black men who have recently been killed by police while not engaged in criminal activity. They find themselves in a confined area furnished with two rather extreme skateboard ramps and no skateboards, which is as apt a metaphor for purgatory as anything else. The only other presence, one which never leaves, is the audience itself, a group of (mostly white, we can assume) people who are only there to watch, mute.

The men are intermittently mystified by those watchers, but they are most consumed by trying to figure out what has happened to them, as you might when you have been violently wrenched out of your life. As they appear one by one, sliding down the ramp that is too high and slick for them to climb back out, they interact in a variety of ways devised by the playwright. They rant and rage, they do-wop, they act out a sitcom to a laugh track—but mostly they wonder about why they are there and speculate about what comes next.

Isa is first, baffled by his unusual circumstance but agreeably addressing the "watchers" in the audience, while also sing-songing "Being a Black man just ain't what it used to be." In short order he is joined by the more intellectual Grif, then by a street hustler named Dazzle, Daz for short. The only other element on stage is an old-style printer which generates a list, the names of Black people unjustly executed by police across the U.S.

The final addition to this group is Tiny, a boy with a toy gun who represents Tamir Rice, the Cleveland 12-year-old who was shot and killed on sight while he played cops and robbers on a west side playground. Tiny still wants to play and at one point he suggests they all participate in a game called "Cowboys and Aliens." According to Tiny, "The cowboys don't understand the aliens...they're afraid of them." And he suggests the cowboys will take the aliens away to conduct experiments on them, with the men pitching in by recalling experiments such as injecting Black people with diseases, or exposing them to extreme levels of radiation, or "making us hate ourselves because we don't look like them."

There are many wry laughs in KMP, but each one is fitted with a razor edge that cuts as it amuses. It's a risky high-wire act that Ijames has constructed, but under the direction of Nathan Henry it works most of the time. The two most compelling characters are Isa and Daz, played by Mell-Vonti Bowens, Jr. and Ananias J. Dixon. Bowens serves as a moderator, of sorts, and he uses his warm stage presence to bring us, the watchers, in close. And Dixon spikes the proceedings with a fresh and vital energy that plays well off the others. Aamar-Malik Culbreth invests Tiny with a proper sense of innocence and Darius Stubbs holds his own in the less showy role of Grif.

Director Henry makes many of the lighter bits work well, particularly when the three men keep revisiting a joke they played on Tiny, miming their initial reaction and sharing the laughter together. The most somber moment in the play is devoted to a litany, a reading of the names of the deceased while the names are also projected on the ramps that weep a flood of stylized tears, a heartbreaking effect created by projection designer T. Paul Lowry.

At one point, a character recalls something he saw on his way to this way-station when he saw "books by people who were shot before they could write—books they couldn't write or wouldn't write." Fortunately, James Ijames has written this powerful piece of theater, and we are honored to experience it.