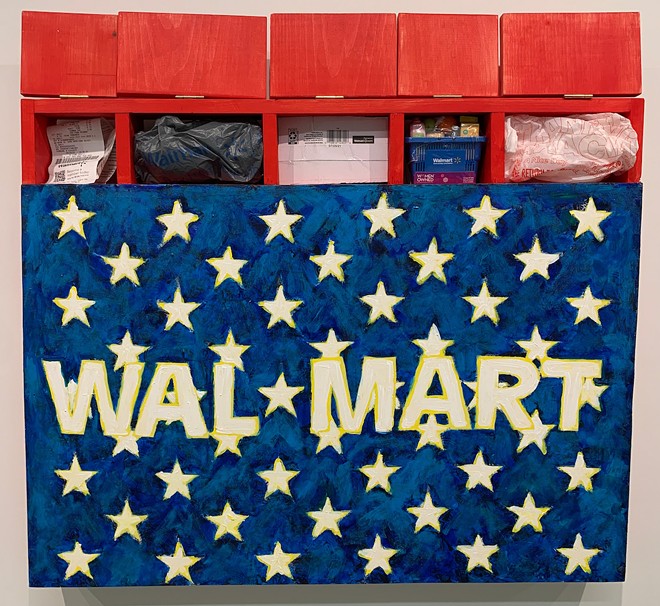 'Cheap Thrills,' which opened last week at Abattoir Gallery (3619 Walton Ave., Suite C 102) and which runs for a couple more weeks, is a deep dive into the world of commodity from artists Eryka Townsend and Alex Vlasov.

The show mixes humor, horror and thought-provoking tongue-in-cheek displays that engage the viewer in a conversation about our relationship to product positioning and the mighty dollar.

"The artists created an installation musing on the allure and pitfalls of consumer-driven society, focusing on the consumption of off-brand goods (dupes) and the culture of discount shopping, both in the mall and at the local Dollar Stores. Product design, product placement, competition, and convenience are analyzed through humor in the work, shaded by an undertone of critique and possibly despair," a press release on the exhibition said.

Townsend, who had a solo presentation at SPACES recently and a forthcoming residency at moCa Cleveland, said this exhibition is an opportunity to explore brands and branding.

“While Pop and Conceptual art usually highlight popular brands such as Campbell’s Soup and Coca-Cola, what about dupes’ position in society?” said Townsend. “Cheap Thrills is an ode to and adoration of inexpensive brands and lower-class values. The artworks in the show take the ready-mades of dupes as a starting point to explore other portals of examination. By questioning value, and how people value one thing over another according to the morphology of marketing, whether it is a box of cereal, an artist’s signature, or a piece of wood, it will always be more popular based on the structure of brand marketing.”

The piece “Walmart with Walmart #2,” for example, meditates on Jasper Johns’ “Flag,” with the blotted rendering of an American flag reading ‘Wal-Mart’ featuring bags, toys, and flipped lids begging to be slammed shut.

The work speaks to how we, as consumers, give a daily salute and pledge with our dollars to corporate retailers who box and package our consumer goods and services, which are ‘pre-fabbed’ and bar-coded along by an endless mass production assembly line. The piece positions the concept of value against price.

Alex Vlasov's work sings with a philosophical cadence in sometimes blatant statements in the piece, “Checkmate,” which is an all-white canvas simply reading, “DUCHAMP IS JUST A GUY,” referring to the French painter, sculptor, chess player, and writer. The phrase was apparently something overheard by the artist in an art class and the piece makes the viewer contemplate on what we allow to enter our psyche and how we put value on and monetize philosophical concepts.

From the Artist’s Statement:

“The work reflects play with language and how the visual and descriptive realities speak to each other. The artworks bring sly wit and the prickly sense of humor suggested by artists such as John Baldessari to invoke a critical voice through playfulness and surprise.”

“I see this show as the meeting point at which two young conceptual artists are exploring a broad subject from either end of a spectrum; Erykah from "popular culture and Alex from the realm of aesthetics and philosophy,” said curator Lisa Kurzner. “I hope the viewer can look deeper into the art context of Cheap Thrills when it comes to conceptual art, and also how consumerism seems like a whole test about how you value things,” concludes Townsend. “I think the viewer should look back at their lifestyle and the items they buy and why?”

These two young artists took the time to conceptualize a well-thought-out, engaging, thought-provoking and fun exhibition, and, as always, Lisa Kurzner and Rose Burlingham helped co-curate a show with graceful movement and wide breadth for presentation in this little gallery located in the Hildebrandt building .

Abattoir is open on Fridays and Saturdays from 12 to 5 p.m. and by appointment. The show runs through July 2nd.
Scroll to read more Arts Stories & Interviews articles
Join the Cleveland Scene Press Club