Characters in this N'Awlins-based play are big, but far from easy. 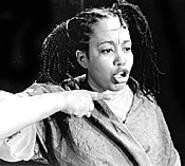 Most people's perception of New Orleans involves little more than beads, bare breasts, and Bourbon Street. But for Nina Domingue, who grew up in N'Awlins, the Big Easy has inspired vivid, cherished memories.

Domingue's solo show about Creole women, Mo Pas Connin -- or Torment, which she wrote and performs, makes its Ohio premiere this weekend at Cleveland Public Theatre as part of its Big [Box] independent-artist series. "Even though it's coming from a specific point of view, the themes are universal," she explains. "It deals with class, gender issues, and racism. But the main theme is family and working out dysfunction in the family, and I think that's something a lot of people can relate to."

The twentysomething playwright and actress, who moved to Cleveland five years ago, takes on nine different roles in the story of a 65-year-old New Orleans priestess who's handed a challenge by a mythical goddess: Make nice with your battle-scarred family, or there'll be hell to pay.

The result is a fast, furious, and occasionally funny ride, with stops along the way to meet characters from "all different parts of New Orleans," says Domingue. "They all have different socioeconomic backgrounds. And they all are related. These are situations I've been in or people I'm very close to have been in."

Most important, says Domingue, Mo Pas Connin is unlike anything she's read or seen onstage. "As an actress of color, I wanted to tell the stories that don't get told so much. You don't get to hear from five-year-old black girls who are in advanced kindergarten. There is no piece that exists that talks about Afro-Creole women from New Orleans.

"You can have everything in our community, from a woman who is addicted to drugs to a woman who is a professor of history," she concludes. "You always see stock characters. I want to see other things."