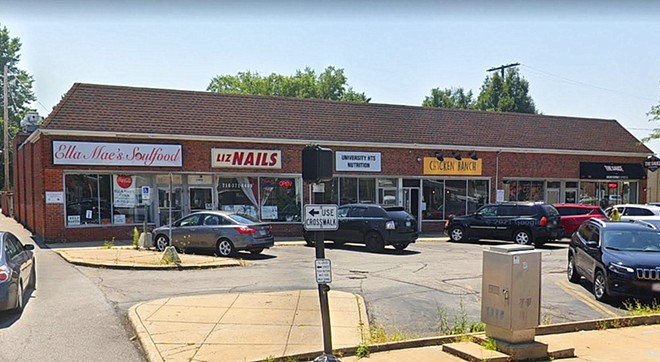 Google Maps
Future home of Zina Greek Street Food
Demetrios Atheneos, who opened the popular Chicken Ranch (13892 Cedar Rd., 216-938-7645) in 2020, has announced his next project. Along with his brother and business partner Niko, the chef is preparing to launch Zina Greek Street Food (13898 Cedar Rd.), which will be located in the former Ella Mae’s Soulfood space in University Heights, just a few doors down from Chicken Ranch.

“I’ve been cooking in Cleveland for 22 years – 35 years overall – and it’s always been classic French or old-school Continental,” Atheneos explains. “I’m Italian and Greek and I’ve never done an Italian or Greek restaurant. Me and my brother Niko are so excited about this project. We’ve been trying to get it off the ground for some time.”

The move also aligns with the chef’s desire to move away from opening large, complex restaurants to focus on smaller, leaner operations like Chicken Ranch.

Zina will offer “good, clean Greek street foods,” adds the chef. A concise menu of staples like lamb sliders, gyros, chicken and pork souvlaki, spanakopita and loukoumades (Greek donuts) will be joined by daily or weekly specials like pastitsio, moussaka and spanakopita.

While primarily a take-out joint, Zina will have a small dining room for people who wish to eat on site.

Atheneos says that in addition to his inherent fondness for Greek cuisine, he was motivated by the sheer lack of such options on Cleveland’s east side.

“One of the main reasons I’m doing this is because the west side has a handful of Greek places – from fast-casual to fine dining,” he explains. “It's important for me to open a real Greek restaurant where you can get real great Greek flavors.”

Atheneos says that he’s hoping to open the doors in late November or early December.

Meanwhile, his Market on Lee/Dominick’s Deli project, which we shared in June, is delayed by construction issues but still moving forward.