The garage-based biz will open this spring in N. Collinwood 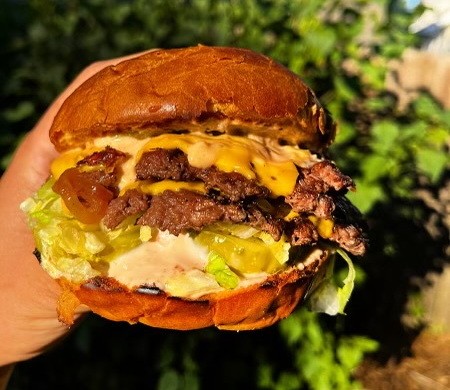 In March of 2020, Bonn Rassavong and Peter Brown suddenly found themselves out of work along with everybody else in the hospitality industry. Rassavong, who worked at Lola, and Brown, who owns Six Shooter Coffee, did not sit idle for long.

“We were both sitting and thinking that we had to do something to keep paying our bills and we decided to start selling burgers and fries out of my garage on 185th,” says Rassavong. “We sold out every weekend for months straight.”

Doinks Burger Joint enjoyed a long, fruitful run as a garage-based biz before setting up semi-permanent residency at the Cleveland Brewery, which continued until two weeks ago. The outpouring of community support persuaded the partners to make the jump to a brick-and-mortar venture.

Come spring, Doinks Burger Joint and Seltzer Bar will open not far from the garage where it all began. The 1,200-square-foot space (15519 Waterloo Rd.) sits a half a block west of Brown’s Six Shooter storefront.

The star of the show will be the OG Doinks burger, a double smash burger with American cheese, shredded lettuce, pickles, sauteed onions and special sauce. The partners intend to keep the menu streamlined but will offer a handful of burger specials, a veggie option and few hot and cold sides.

The “seltzer bar” component will feature a selection of hard-seltzer cocktails made with muddled fruits and house-made syrups.

There will be seating for approximately 40 when you include the bar.

To support their new enterprise, Rassavong and Brown have launched a Kickstarter that is cruising towards its modest goal. And while the money will be very useful when it comes to the design and buildout of their new business, it’s the neighborhood encouragement that really hits home.

“Beyond what the actual money will help us with, a lot of it is a show of community support for us,” Rassavong says. “I feel like it says, we want this, we want this to happen, we want you guys to succeed in our neighborhood. It’s very humbling.”

Doinks joins other new business ventures that currently are taking shape in North Collinwood, which is fueling a sense of optimism that locals say is palpable.

“I was raised in Euclid, I’ve lived in Collinwood for the past 10, 11 years, and I’ve never felt more confident about this area than I do now,” says Rassavong. “I truly believe that we are at a turning point in the Waterloo Arts District.”