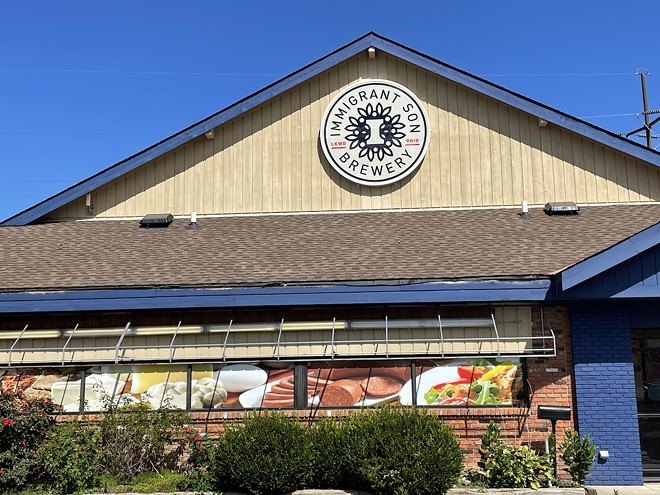 It has been nearly two years since Andrew Revy announced his plans to open Immigrant Son Brewery in Lakewood’s West End neighborhood. During the best of times, opening a brewpub is a complicated endeavor, but attempting to do so in the midst of a pandemic is unimaginably complex.

“The world doesn’t always cooperate,” Revy says. “But it’s a huge relief to see the goal line for sure.”

That goal line is just weeks away, with a projected opening penciled in for late September. For the past two years, Revy and the team at ARC-Form have been working to convert the former Constantino’s Market (and Nature’s Bin) into Lakewood’s first and only brewery. The 9,000-square-foot building proved an ideal foundation from which to build out Immigrant Son, says Revy. Original features like skylights, exposed timber framework, windows and even the grocery’s dairy cooler all were retained.

The shiny 10-barrel brewhouse is visible from the dining room thanks to expansive windows. Brewmaster Erik Luli has been busy brewing for weeks in order to open with a roster of approximately 20 beers. Classic styles like pilsner, saison, Kolsch, common ale, IPA and stout dominate but will be supported by seasonals and specials. Those beers, and limited can releases like the Zydrunas Ilgauskas collaboration PerZverance, also will begin appearing at select bars and restaurants around town. Erich Lasher, industry veteran and owner of the dearly departed La Cave du Vin, will be running a bar program that is sure to please beer, wine and cocktail enthusiasts alike.

The lofty main room boasts cathedral ceilings, a 15-seat bar and plenty of high top and booth seating. Additional seating can be found in an overflow/private dining space and forthcoming patio. The building comes with a large 40-car parking lot.

Immigrant Son is more than a catchy name; it’s the foundation of the entire project and it touches all aspects of the food and drink program.
“I’m a first-generation American,” Revy explains. “My parents are from Hungary, who came here two weeks before the revolution. So, I’m an immigrant son.” 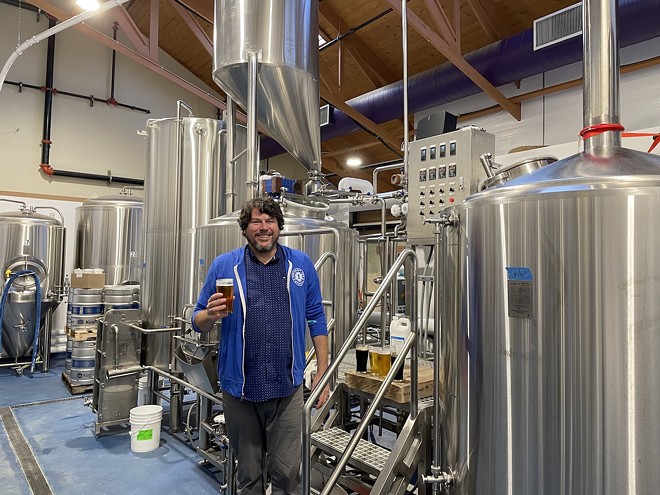 Photo by Doug Trattner
Andrew Revy
Executive chef Rob Dippong has used that inspiration to create a globally inspired menu that draws on our city’s melting pot roots. The Johnson & Wales grad has his culinary sights set a little higher than what one would find at the neighborhood pub. There’s a section of lángos, the classic Hungarian fried bread, with various toppings and treatments. Other small plates include smoked and grilled whole wings, charred octopus with chorizo and romesco, Kolsch-steamed mussels frites, and cheddar-filled pierogies with butter and onion.

There are Eastern European salads like the shaved cucumber and beet with dill and sour cream as well as classic Greek and Caesar salads. The “handheld” section veers from traditional, like a smash burger with caramelized onions and Swiss, to the intriguing, as in the case of the chicken paprikash sandwich on challah. A full slate of entrees hits the mark with dishes like walleye fish and chips, smoked pork chop with spaetzle, wagyu steak frites, and bacon-wrapped meatloaf and mashed potatoes.

Revy has spent years working on this project and he is quick to mention that the hardest work is yet to come. Now that the building and brewery are largely completed, he is shifting his focus to the softer side of the business. Rather than go the route of many of his brewery brethren, Immigrant Son will be a full-service establishment with slightly more ambitious aspirations.

Immigrant Son Brewery is located at 18120 Sloane Ave. and is expected to open in late September.