An ambitious menu and world-class design await at Intro 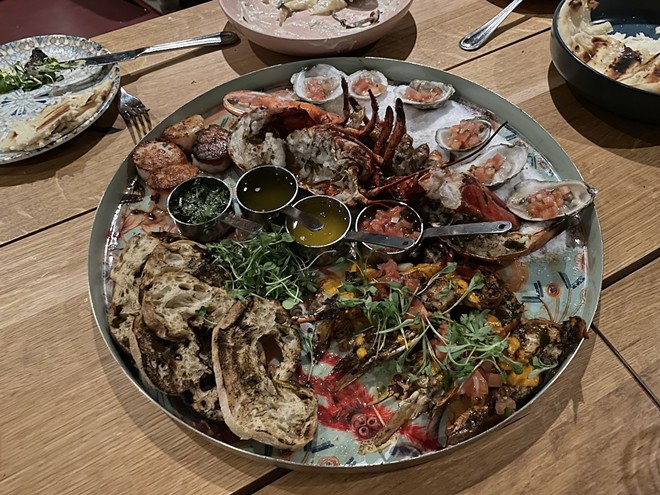 To get to Jaja, guests first gather in a small ground-floor vestibule with little more than a host stand and bench. After a brief pause, groups enter an elevator wrapped in the sort of lush botanical wallpaper made famous by the opening credits of the White Lotus. In the time it takes to ascend one floor, diners are transported to an environment that is so un-Cleveland it’s temporarily jarring. Outside: brick, steel, bridges, smokestacks and railroad tracks. Inside: tropical greenery, warm fabrics, bold patterns and a soupcon of taxidermy.

In a year populated with drama-filled openings, Jaja walks away with the gold. For those of us who perpetually ask the question while traveling, “Why can’t Cleveland have a place like this,” the designers behind Intro’s newest addition have answered with a world-class gem. Beneath a garland-wrapped pergola strung with oversize string lights sits an intimate, whimsical and comfortable 90-seat dining room. Windows on three sides offer views of the city skyline and West Side Market clocktower.

With a space this extraordinary, the restaurant easily could have settled on a straightforward steakhouse theme, considering the live-fire grill that dominates the first-floor kitchen that Jaja shares with Pioneer. But to that “modern steakhouse” foundation the owners added globally influenced vegetable, fish and meat dishes, most in small- or shareable-plate form.

Guests are welcomed with a complimentary tulip of cava that the server calls the “Jaja handshake.” If there’s one restaurant at which to not skip the cocktail course, it’s this one. From the stunning six-seat bar at the front of the room come bracing creations like She Only Wears Green ($15) and It’s Pronounced “How-Stun” ($15). The former weaves gin, chartreuse, honeydew and mint into an aquamarine dream while the latter fortifies a classic Manhattan with Amaro Montenegro and vanilla bitters.

Given the meandering nature of the menu, it takes some time to chart a course. For our table, it was helpful to start by deciding which (if any) parrillada we would order. The two large platters of mixed seafood or grilled meat contain items listed elsewhere on the menu, thus winnowing remaining options.

While enjoying cocktails, we ripped pieces of warm naan-like flatbread to scoop up blobs of creamy burrata ($18) and accompanying arugula pesto. The fresh cheese was capped with a salty parmesan crisp. Jaja made an aubergine fan out of me thanks to the eggplant and roasted tomato spread ($15). Faintly smoky, fairly spicy and gilded with a dollop of labneh, the dip is a great starter.

Higher up on the food chain, the grilled octopus ($20) arrived with a glorious char, ideal meaty texture and a stack of crisp-edged potato planks. The pulpo, we agreed, would have benefited from a more aggressive spice component. In the case of the roasted bone marrow ($22), two deep canoes filled with buttery “beef pudding,” it was a minor temperature issue that stood between good and great.

Our server could not have been more pleasant and attentive, arriving when needed, making scarce when not. Empty cocktail glasses vanished when dry, water glasses rarely dipped below the midway mark and fresh plates and silver appeared between main courses. But that didn’t prevent a food runner from delivering a plate of pasta when nobody at the table had plates or utensils. It made for a tense few minutes. Gladly, the pappardelle ($22) – wide, fresh noodles bathed in a delicate cream sauce and capped with a forest of caramelized wild mushrooms – was still hot when we dug in. A shower of toasted breadcrumbs added a welcome crunch.

Because we decided to go with the seafood parrillada, we also ordered an a la carte steak. The menu offers eight cuts, most of them prime and/or dry-aged, ranging from an 8-ounce filet on up to a nearly 3-pound tomahawk ribeye. Our boneless ribeye ($72), sliced and served with chimichurri, was tender, beefy and just shy of medium. You would expect a more robust char from the wood-fired grill but our chop lacked such a crust.

There’s nothing more celebratory than a shimmering seafood platter and the one at Jaja is impressive. At $115, the hubcap-size tray arrived with a half-dozen grilled oysters, four jumbo, deeply burnished scallops, a pair of grilled head-on prawns and what looked to be 1-pound lobster split, grilled and cracked to ease enjoyment. On the side is plenty of grilled bread, melted butter and a variety of sauces.

While lingering over Chantilly cream-topped cheesecake ($16), espresso-drizzled ice cream with shortbread cookies ($12), and Hungarian dessert wine ($15) off Jaja’s serious list, we imagined how much more magical an evening at Jaja will be when the retractable glass roof gives way to the open sky.