Lunch at the Jake is no picnic

Send a News Tip
Flea Markets The Memphis Drive-In Flea Market, 10543 Memphis Avenue, is open every Wednesday, Saturday, and Sunday, April through November. Admission is 75 cents. The Hartville Flea Market, 1.5 miles west of Hartville on Route 619, is open Monday and Thursday year-round, as well as the Saturdays of Memorial Day, Independence Day, and Labor Day weekends. Admission is free. 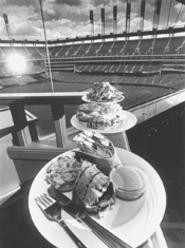 Walter Novak
Tier-jerker: The Terrace Club's views astound; its food disappoints.
There's a lot to like about lunch at the handsome Terrace Club, our major league ballpark's foremost room with a view. While the eight-tiered restaurant is open to members only during games, the upper-level bar serves lunch to the public every weekday as long as no day game is on the schedule. But just because Roberto and Richie won't be suited up when you arrive doesn't mean that lunch here will be dull: The sensation of hanging out over that verdant outfield, watching the enormous American flag undulate in the wind, and seeing the city skyline stretch out beyond the stadium walls is a thrill all its own. And usually, there is something of human interest going on below. On one visit, we watched some pretty impressive ball being played by the Rhodes Rams vs. the Lincoln West Wolverines in the Cleveland Schools Championship Game; on another, we got a peek at players taking batting practice before that evening's game. Even if the activity is nothing more than the meticulous routines of the grounds crew -- who seem intent upon aligning the very molecules of dust that make up the diamond -- or the arching sweep of the fountain-like sprinklers, it's a setting like no other and one that rightly attracts downtown workers, families, fans, and tourists alike.

The Terrace Club is one of a number of eateries in sports and entertainment venues run by Levy Restaurants. Founded in 1978 by brothers Larry and Mark Levy, the Chicago-based business has grown to include dining facilities in spots like Wrigley Field, Comiskey Park, and Dodger Stadium, as well as restaurants on the 99th floor of the Sears Tower and at Orlando's Disney World Resort. (At the Jake, Levy staffers, under the guidance of General Manager Paul Regal and Executive Chef Jim Abbey, also provide foodservice for the suites and club seats.) But despite the Levys' notable business success, the Terrace Club's food and service, at least at midday, aren't exactly batting .400. While we found some well-executed dishes, too many important details were overlooked to win the restaurant a berth in a culinary pennant race anytime soon.

The two-level dining room is sleek and polished, with lots of blond woodwork and deco-style accents of black marble and brushed aluminum. Tall tables, set with green linen napkins, and comfortable upholstered chairs give most seats a fine view of the field. And be sure to take a moment to appreciate the whimsical carpeting, with its lighthearted ball-and-base design.

As for the lunch menu, it's a tasty-sounding compilation of manly sandwiches -- burgers, Italian sausage with peppers, barbecued pork, and the like -- plus a few large salads and a handful of appetizers ranging from a well-executed crab cake to Buffalo-style chicken wings. Portions are generous and, if everything were well-prepared, prices would seem reasonable by downtown standards. But when the greens in the house salad are limp and brown, and a slice of Key Lime Pie is still frozen in the middle, a meal here doesn't feel like much of a bargain.

Among the relatively heavy hitters was the Applewood-Smoked Barbecued Pork Sandwich: a giant pileup of shredded and sliced meat in a mild, sweet sauce, topped with melted cheddar cheese and a frizzle of onions, on a lightly grilled Kaiser roll. Big and deliciously sloppy, the sandwich lent itself well to the knife-and-fork treatment. Also perfectly fine were the Cobb Salad Wrap: a pleasantly chewy and moist whole-wheat flatbread hugging a filling of chopped romaine, cubes of chicken breast, a bit of bacon, some yellow pepper, and blue cheese; and the Chicken Caesar Sandwich: a very nicely done, garlicky grilled chicken breast topped with chopped romaine, a slice of tomato, shredded Parmesan, and a thin, tangy dressing.

But while Cleveland is home to some truly outstanding Reuben sandwiches, the one we got at the Terrace Club wasn't in the same league. The thickly sliced corned beef was in scarce supply, and we never did find the sauerkraut. The sandwich had been barely grilled, so the two slices of Swiss cheese that topped it seemed more fatigued than melted, and the rye bread was soggy, not crisp. But the biggest strikeout was the pricey Char-Fired Ribeye Steak Sandwich, an extremely thin piece of overcooked meat with little flavor (a dollop of Gorgonzola butter was responsible for whatever taste the steak had), but more than enough fat and gristle, served on a massive slab of garlic-buttered and toasted ciabatta bread. The tariff for this uninspiring plate? An out-of-the-ballpark $12.50.

Sandwiches don't come with pickles, french fries, or chips, but do include a cup of soggy, room-temperature cole slaw. A serving of garlic-Parmesan fries is an additional $1.50, but can easily serve the entire table. For an extra $3.50, those same fries can be had with a topping of melted blue cheese. The rich, salty mess probably would have been pretty good, too, if it hadn't been cold by the time it arrived.

Most appetizer portions are large enough to pinch-hit as luncheon entrées. For example, a nine-piece serving of mildly spiced Buffalo chicken wings in an undistinguished sauce, sided by plenty of chubby carrot and celery spears and blue-cheese dressing, would have made a filling meal. A crunchy eight-piece flatbread "pizza" topped with pesto, some zesty feta cheese, and plump, oven-dried tomato slices, with a sprinkling of fresh rosemary and basil, was very good and was plenty large to provide leftovers for the next day. While not as generously sized as the other appetizers, the biggest surprise on the menu was the more-than-decent crab cake, which had an unusually high crab-to-filler ratio and a fresh seafood taste; it came with a bright lemon aïoli and an interesting slaw of crisp jicama, tossed with sliced red and yellow pepper in a mild vinaigrette. But in yet another instance of snatching defeat from the jaws of victory, the crab cake was burnt on the bottom.

Service on both visits was perfunctory. We watched as one server slapped our sandwiches down on another table by mistake; soon afterward, a different server gave us the iced tea destined for our neighbors. On each occasion, the mistaken staffer returned a few moments later and snatched the food away, then delivered it to its rightful place, making us rejoice that cold and flu season was over. Along the same lines, several pieces of soiled flatware had been used in the table settings, and our coffee was delivered in clear glass mugs that were smudged with what looked like soot.

For dessert on one visit, we tried the Key Lime Pie: an ample wedge of tart-and-tasty filling in a crisp graham-cracker crust; unfortunately, it was still frozen in the center. Someone had thought to top the pie with a puff of whipped cream and a flounce of fresh mint; unfortunately, the classy intended effect was compromised by the fact that the mint had gone limp during its stay in the cooler. On our second visit, as a concession to the children, we ordered The Landslide: a mountainous wedge of layered cappuccino, chocolate-chocolate chip, and vanilla ice creams, topped with M&Ms, chocolate chips, and crunchy macadamia nuts, and slathered with rivers of caramel and chocolate sauces. Every bit as gooey and excessive as it sounds, it was an unqualified hit with the younger set, who left the restaurant with sweet and sticky smiles on their little faces.

What's especially frustrating is how close the Terrace Club comes to actually scoring. After all, it shouldn't take an extraordinarily skilled lineup to ensure that tableware is clean, greens are fresh and crisp, food is served at the proper temperature, and service is welcoming. But given the current state of affairs, the staff is in a position a little like a farm-team pitcher: Until they can throw it into the zone reliably, they are just not ready to move up to the big leagues.