Karen Small to Close Flying Fig in Ohio City After 23 Years. Will Reopen in May as Something New and Different 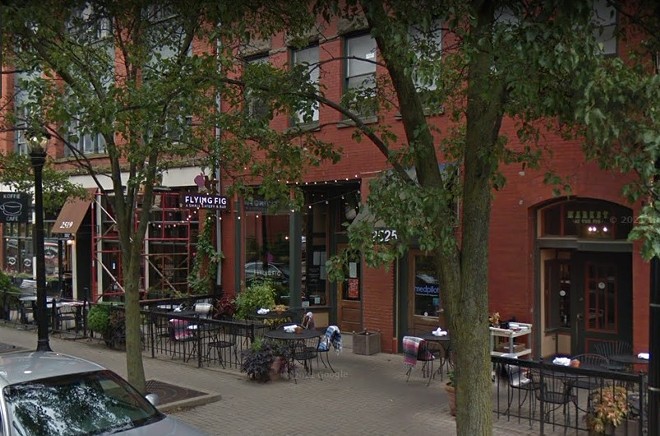 During the past two years alone, Cleveland diners have said goodbye to a dizzying number of upscale restaurants, among them Lola, Fire, Spice, Black Pig, Greenhouse, Chinato, Bar Cento and the Plum. Unfortunately, we are about to lose one more. Karen Small has just announced her plans to shutter the Flying Fig (2523 Market Ave., 216-241-4243), her farm-to-table bistro in Ohio City. That will occur after dinner on Saturday, February 26th.

Also closing at the same time will be the Market at the Fig, the adjacent gourmet market. Plans call for significant interior modifications to ready both spaces for a new concept, which should open in May. All that Small would say about the new business is that it is not a straightforward full-service restaurant.

“It will definitely retain its character and the food will still be coming from the same place,” she says.

When Small opened the Fig in 1999, the smart, stylish restaurant on Market Avenue was an instant success. The chef was a pioneer in so many ways, from establishing local foodways to popularizing small plates to being a proponent of veg-heavy dishes.

For 23 years, people have flocked to the Fig for seasonal dishes served up in an effortlessly hip and cosmopolitan room. Small has always shown remarkable restraint in the kitchen, making sure that the ingredients (and the people and families who produce them) were always the true stars of the plate.

Over the years, Small has earned national recognition from glossy food magazines, the James Beard Foundation and countless online media sources, but she has never earned the kind of attention heaped upon the likes of Michael Symon, Doug Katz or Jonathon Sawyer. That’s likely thanks to the chef’s low-key demeanor and lack of expansion over the years. Apart from Market at the Fig, the European-style gourmet market she opened in 2010, Small has been reluctant to expand beyond her four walls.

That will change in the coming weeks when she finally unveils Juneberry, a project some three years in the making. The 30-seat breakfast-and-lunch diner, located in the former Jack Flaps space in Ohio City, has undergone interior changes to make it feel less industrial and somewhat “funkier,” noted Small. A liquor license is in the plans as well. Small says that she’s just waiting on final approval, which should happen within the next four weeks.

“I think that as a city we don’t have enough breakfast places and variety for stuff like that,” Small told Scene when she shared the news.

As for why Small decided to shutter the Fig now after 23 years, she cites historic changes to the neighborhood around the restaurant. Few areas of town have evolved more in the past two decades than Ohio City.

Small also sees the positive side of such attention and she hopes that it will help to improve the situation at the nearby West Side Market.

For all the diners who have supported her business since 1999, Small says that she is forever grateful and hopeful to see them down the road.

“There are so many great choices these days and I appreciate their support,” she says. “I just want them to come back when we reopen. It will be okay, it will just be a little different.”