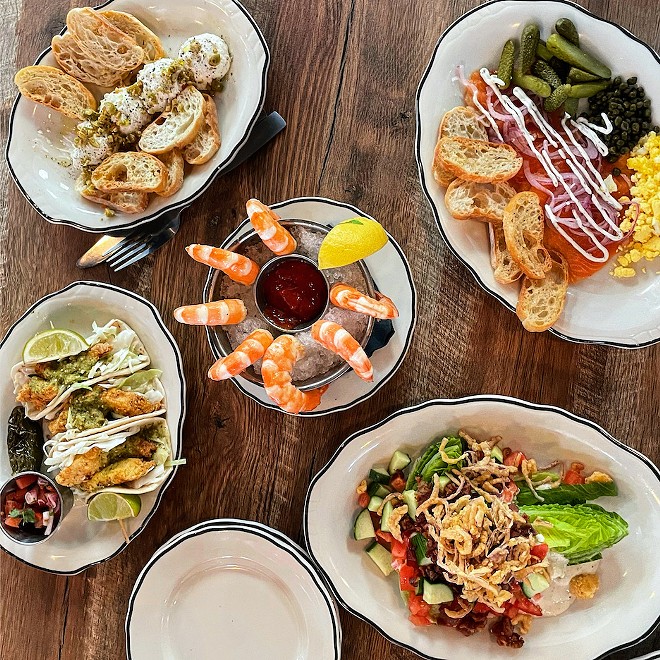 If you don’t live on the far west side, you probably have never made it to Hail Mary’s, an unassuming tavern in Westlake. Going on five years, the pub has earned a devoted following thanks to its intimate vibe, scratch-made bar food and warm service. But while the namesake football pass leaves everything to chance, the owners of Hail Mary’s know precisely what they’re doing.

Between the pair, Wil and Julie Novak have more combined restaurant experience than the entire staff of a typical restaurant. Both spent ages with Cameron Mitchell Restaurants, with Wil working alongside Mitchell himself as he opened one multi-million-dollar restaurant after another. After three decades spent working for other operators, the couple finally said enough is enough.

“We looked at each other and we were like, this is crazy, why aren’t we doing this for ourselves,” Wil explains.

Building off the success of Hail Mary’s, the Novaks recently opened Salty Mary's Oyster Bar, also in Westlake. Just as their mentor had done a million times, the couple scoured the landscape for a concept they felt was lacking in their neck of the woods. That brainchild turned out to be a casual seafood restaurant.

“Simple done right,” says Wil. “Let the product speak for itself. I was in fine dining for many, many years and it’s too hoity-toity. I just want people to be able to come into a bar or restaurant in jeans and a t-shirt and be completely fine.”

R&D trips to Maryland, Delaware, South Carolina and New Orleans have netted a menu that offers a tantalizing mix of regional seafood gems combined with some creative originals. Diners kick back to the soothing sounds of yacht rock, snuggle up to the real wood fire, and knock back oysters done every which way. We enjoyed delicately fried oysters ($11) with roasted jalapeno aioli and garlicky broiled oysters ($11), both presented in their shells, but the restaurant also offers them raw, as shooters in mini Bloody Marys, and Rockefeller-style with spinach, bacon and blue cheese.

The beer-battered fish and chips ($24) stars pristine fresh cod, which flakes off into lush white planks. Hail Mary’s customers have grown to love the house “flat fries,” which are thin, wide, crisp and perfectly seasoned potatoes, and they make an appearance at Salty Mary’s as well. The blackened walleye sandwich ($16) is well seasoned, perfectly cooked and served in a soft bun with slaw and remoulade. The Novaks did their homework when crafting the New Orleans-style BBQ shrimp recipe ($22). Like the best Creole versions, the plump, tail-on shrimp are tossed in smoky spices and sauteed in buckets of butter. While typical versions come with French bread for dipping, here the kitchen ditches moderation and serves them atop creamy cheddar grits.

Not everyone in the group loves seafood, the Novaks know, so they offer appetizers like deviled eggs and hushpuppy spoon bread, thoughtfully composed salads like the superb chopped ($10) in Green Goddess, and a burger and hangar steak that I can only assume are equally well prepared.

The owners took over a long-dormant Friendly’s and, after completely gutting the property, gave it a bright and beachy makeover. There’s generous counter-bar seating that offers views into the open kitchen. It’s a great spot to enjoy happy hour drinks and discounted snacks. A passed ballot measure in this most recent election grants Salty Mary’s a Sunday pass. Now, Game Day can include Bloody Marys garnished with Old Bay shrimp and pickled peppers.

Although they didn’t draw up the play this way, soon after opening Salty Mary’s, the Novaks opened Smokin’ Mary’s BBQ Pit and Saloon a little farther down Center Ridge in North Ridgeville. It’s a BBQ joint with Tex-Mex flair. A quick glance at the menu reveals a distinctive take on a classic Texas roadhouse that demands a visit.
Don’t think for a moment that the Novaks are running short on bright ideas. Like their former employer, the entrepreneurs have been bit good and hard by the bug.

“We have a couple different concepts in mind,” Wil teases.