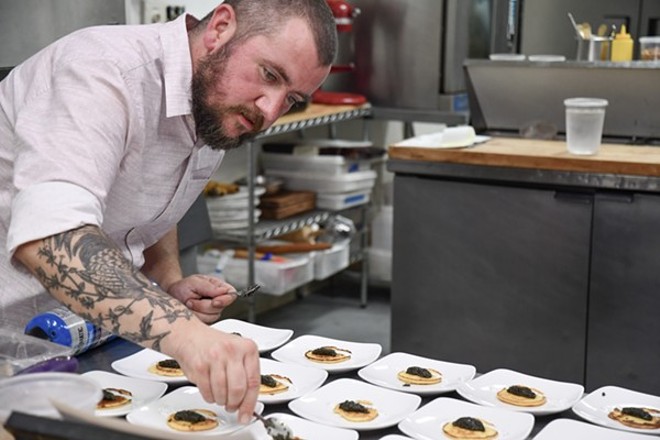 Courtesy the Black Pig
Chef Michael Nowak in the kitchen

"We have operated for almost 9 great years, and are excited to end with a week of positive energy, great food, and familiar faces," he said in a statement. "Our decision to close is not financially based, or related to the pandemic. We decided about a year ago that it was the right move for my family, as we are looking to relocate to the New England area. We have sold our real estate, passing the torch to the next operator to look over this historic building in Ohio City."

Easily agreed upon as one of the best restaurants in Cleveland, the Black Pig made its mark in not one but two Ohio City spots, rounding into its own in 2015 after a move from its former home on West 25th among bustling bars to a quieter post on Bridge Ave. Its legacy includes not just the exquisite meals turned out from the kitchen but the various chefs who made their way through that kitchen and onto other gigs around town.

"We have loved our years in Cleveland and are proud of the restaurant and reputation we have created. I am looking forward to my next steps, with a focus on my family," Nowak said. "We are excited to close on our own terms, not dictated by finances or poor performance. We have had so many great employees over the years, and have met so many great people. We hope that we have left a positive mark on the city, and the amazing food scene here."

Following a star-studded series of collaborative dinners featuring some of those former chefs, the Black Pig will open for regular service from April 7 to 11 before closing its doors for good.