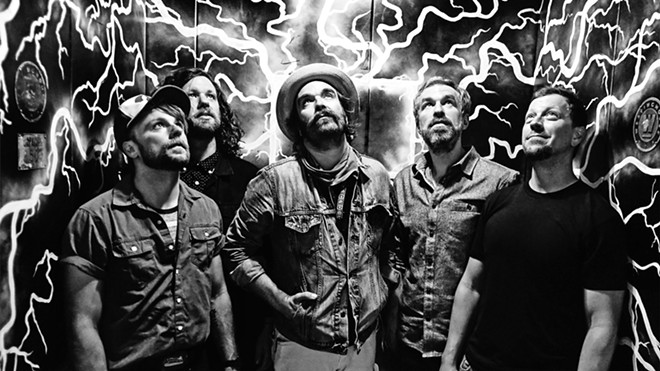 THE COLLEGE TRY: Originally from New Jersey, singer-guitarist Scott Terry went to Ohio University with the intention of getting a degree and starting a band. He wound up accomplishing both, and the band he started, the alt-rock outfit Red Wanting Blue, is still going strong after 25-plus years. “We were lucky that we took off regionally by way of playing a lot of colleges,” says Terry. “If I had to give any kid advice about how to start a band, I would say go to college. Even if you don’t need to go to college, go back to college. There were so many people from all over Ohio there, and they got to know us quickly. We thought it was an amazing experience, and we knew we had to keep it going.”

A DIY APPROACH: Inspired by the fact that the Dave Matthews Band successfully sold their own CDs in their early days, Red Wanting Blue began visiting independent record stores and hawking their self-produced releases without the help of a record label. “I remember being in college and printing shit tons of CD,” says Terry. “Those were the salad days. You could drive around any college and find the music store and you could sell a box of 25 CDs to them. Nobody does that anymore.” Terry says the band hasn't really had any significant major labels offers over the years, but it eventually signed to the indie imprint Fanatic in the 2010s and even made an appearance on Late Show with David Letterman. “But when it came to the major labels, we weren’t a jam band, and we weren’t a Nickelback or Creed,” says Terry. “We were represented by this guy who managed Ryan Adams, and he put us in touch with Jamie Candiloro, who produced Ryan Adams’s Easy Tiger record. I thought that was more our speed. I didn’t want to try to pull off wearing black pleather pants and being a big rock star. We’re more blue jeans and brown boots.”

WHY YOU SHOULD HEAR THEM: Four years ago, the band leaned in an alt-country direction for The Wanting, which singer-songwriter Will Hoge produced; the group now has a new album in the works. The forthcoming LP’s first single, “Hey, ’84,” comes off as a '90s alt-rock anthem in the vein of Gin Blossoms and Toad the Wet Sprocket. Terry says the song went over particularly well during a fall tour. “When I was in college, I wanted to be in the biggest band on the planet,” he says. “The more you tour and the older you get, you start to change. It was either Todd Snider or John Prine who said that if you can go to any town and pull in 500 people, that’s a success. If you can make it in America, you can make it anywhere. We just did a tour in the fall and seeing the numbers after the pandemic, we were worried if people had changed forever or were still coming out. it was heart-warming [to see people still came out]. It was nice to look out and see how the band has grown. I’m really proud of what we’ve done.”

WHERE YOU CAN HEAR THEM: redwantingblue.com.

WHERE YOU CAN SEE THEM: Red Wanting Blue performs with JD Eicher and Angela Perley at 9 p.m. on Saturday, Dec. 31, at the Goodyear Theater in Akron.
Coming soon: Cleveland Scene Daily newsletter. We’ll send you a handful of interesting Cleveland stories every morning. Subscribe now to not miss a thing. Follow us: Google News | NewsBreak | Instagram | Facebook | Twitter