Group performs on October 25 at the Beachland 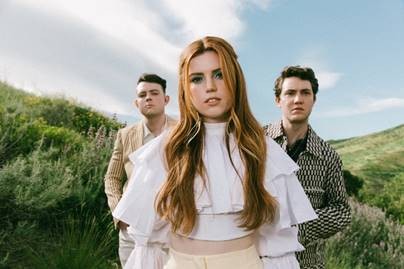 Courtesy of Press Here Publicity
Echosmith.
Echosmith singer Sydney Sierota says that the shimmering “Hang Around,” the first single from the indie pop band’s forthcoming album, aptly sets the tone for what she’s calling a “new chapter" for the group of siblings.

“It was literally the first song we wrote where we said, 'This is what we want to sound like,’” she says in a recent phone interview from her San Diego home. Echosmith performs on Tuesday, Oct. 25, at the Beachland Ballroom. “It opened up the floodgates of inspiration for all the songs afterward. All the new songs happened after ‘Hang Around.’ It happened in a very natural way. ['Hang Around'] was written by just Echosmith. It was cool to thing for us. We did it all ourselves. Noah [Sierota] produced it. It was Noah’s first time producing our stuff. It was so cool to give ourselves the space and freedom to try that out even though that was different for us.”

Sierota’s voice fluctuates on the track as she nails both high notes as well as lower, Sheryl Crow-like registers. Taking a DIY approach, she even recorded her vocals at her own home studio.

“It’s just an extra bedroom,” she says of the space. “It’s not a crazy, built-out studio. I did my vocal on a Shure SM7B microphone. I don’t even have a mic stand. I was holding the mic and sitting in my chair and singing alone. It was so fun. We wouldn’t have done that before. It always had to be in a certain setting. I was able to get a more honest vocal because it was just me. I could try things. I had full freedom.”

In a way, the band has gone back to its roots. Formed in Chino, CA, a place that's really a musical void in Southern California, the band started out by doing things on a shoestring budget and had to take a 45-minute drive to Santa Monica to find anything resembling a gig. And even that involved busking on the street to passersby.

“The schools we went to didn’t think it was cool to be in a band,” says Sierota, adding that she even thought about trying out for the cheerleading team. “It was all about sports.”

That feeling of being on the margins inspired the band’s first hit single, “Cool Kids,” a catchy number that finds Sierota whispering with sarcasm as she croons, “I wish I could be like the cool kids because all the cool kids seem to fit in.”

The band recently recorded an updated version of the song that takes on an even more personal meaning.

“‘Hang Around’ was coming out the very next day,” says Sierota when asked about what led to the new version. “We were trying to be on Tik-Tok and do the promotion things we needed to do. I was scrolling on there, and I came across an Addison Ray video. She was mouthing the words to a sped-up version, and at first I didn’t recognize it. That was when I heard of what was happening.”

The band held an informal meeting and decided it made sense to redo the track.

“We asked ourselves what if the song is not finished yet,” says Sierota. “There has been this instrumental moment and that’s when I address the crowd when we play it live. it was this spot I felt like I had to fill. When we were messing around with it, we didn’t know that we would write a bridge and put out the new version. Once the bridge came out, we wrote the rest in 30 minutes. I recorded the vocal right away sitting in a chair in the studio with my brothers. I got teary-eyed because I felt that full circle moment happen. It just felt really special to do that. It’s like telling people that it’s more than just my song. That’s why we called it ‘our version.’ It belongs to everyone else as well.”

In advance of the upcoming tour, the group has also just released another new single, the snappy “Gelato.”

“It’s about how we are all going through a lot, and we have a lot on our minds,” says Sierota when asked about the track. “I struggle a lot with feeling present. I find myself romanticizing the past or worrying about what might happen tomorrow. This song encompasses that feeling of ‘we do feel that way and that’s real, but let’s take a moment to be here right now and choose to be okay without knowing about tomorrow.’ Sometimes, you need a break from overthinking and overanalyzing and your bills and loans and all those things we struggle with. Sometimes, you need a break from that or life can be too exhausting. It’s about being present with the people you are with and deciding to choose to that.”

So far, the band’s two new songs come off as cheerful, uplifting numbers. So how does Sierota manage to stay positive with the world is falling apart?

“[My marriage] has been a huge rock for me throughout the whole pandemic and the ups and downs that have come with it,” she says. “Everything was so inconsistent, but my marriage was so consistent. That was helpful for me, of course. There are songs that will come out next that capture that feeling of despair. You have to capture that stuff too. I have always loved melancholy songs, which is funny because I’m very bubbly by nature. Something about that melancholy feeling has always spoken to me. These past few years have been really challenging, but I’ve seen more growth for myself than I ever have. It meant a lot of work and a lot of tears.”