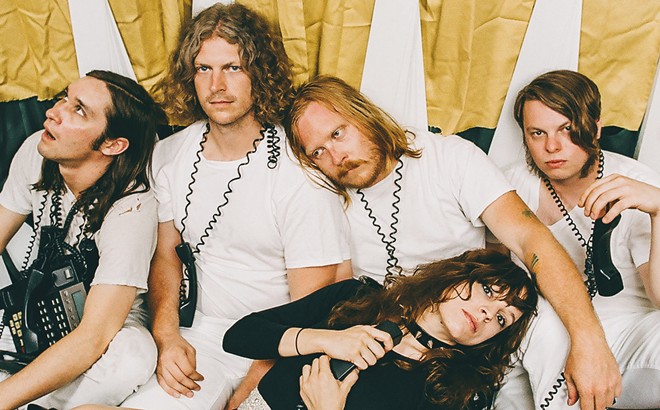 “To be honest, garage rock like late-’60s influenced psych was really popular [in Austin at the time],” says singer Sabrina Ellis in a recent phone interview. A Giant Dog performs with Mourning [A] BLKstar and Suitor on Tuesday, Aug. 16, at the Beachland Ballroom. “Everyone sounded like a band on a Nuggets comp. The older bands saw our energy and were cool to us, but they didn’t really like what we doing right away.”

In fact, some of the scene’s older members were downright dismissive.

“I remember some older dudes say to me, ‘You know, if y’all get popular, it’s because of your tits.’ I thought, ‘Shit, I’m damned if I do and damned if I don’t here. I have no control over that.' But I thought, ‘Sure, if it helps our band, great.’ I don’t think it helped our band, and it sucked be told that if we did receive validation, it would be because of having a female body on stage. I think Austin’s scene has changed significantly in the last 15 years since we started out. It feels very diverse and very much like an equal playing field.”

Initially, A Giant Dog attracted the attention of the Chicago-based Tic Tac Totally Records, which released its debut album, 2012’s Fight. A DIY affair, the album found the band recording in a garage and using a primitive Atari tape machine. That album, along with the follow up, 2013’s Bone, were recently reissued, and the band’s been playing tunes from both records on its current tour.

“Revisiting it now, ten years after we put it out, I’m like, ‘Who wrote these lyrics? There are some wild thoughts and ideas that we can still relate to but are also kind of forgotten,” says Ellis. “They’re just in our blood somewhere. It’s fun to revisit our youth by relearning our songs."

The band had better resources at its disposal for Bone, which it cut with Mike McCarthy (Spoon, Patty Griffin). Songs such as the careening “Saturday” swagger with Iggy & the Stooges like energy. At other moments, Ellis recalls Joan Jett as she bellows over nasty guitar riffs.

“Bone was our first time in a proper studio,” says Ellis. “We brought in some horn players. It was our first time to do that. It was fun to work in Mike’s studio. He had a good setup at that time. It had been a film production studio before he got it. And we used thicker tape!”

Until recently, those first two albums had been out-of-print. Merge Records, the indie imprint that puts out A Giant Dog’s new albums, asked the band to reissue them and after some hesitation, the group finally relented earlier this year.

“We had this chip on our shoulder,” says Ellis when asked about the decision to put Fight and Bone back into print. “The proudest thing for our whole lives is that some of our albums have been black marketed. For a while, we wouldn’t repress them because it kind of turned us on.”

The band signed to Merge in 2016 and has established a good working relationship with the label. In fact, it even covered Arcade Fire's Neon Bible for Merge’s label subscription series. While it didn’t intend to turn Neon Bible into a punk-y affair, it had to alter the songs so they’d fit onto a single slab of wax.

“Halfway through the recording process, Mac [McCaughan] from Merge called and said, ‘Holy shit, you guys. I just realized something. Neon Bible was double vinyl but we only have the budget for you guys to do single vinyl.’ That accounted for some of the style. We had to play everything really fast and make it about ten minutes shorter.”

Speaking of playing things at a different tempo, the band has found that the songs on its first two albums tend to be fast and furious.

“We relearned the first two records and the songs are really fast. We have to play about 20 songs to fill out a set," says Ellis. "It’s a ringer. The songs are much lower in my range. I’m having to basically be more manly."

Ellis says the band is still tweaking the songs on a forthcoming album.

“We’re at that point where we’ll probably record four versions of this album before we release it,” she says. “We’re really excited about it. It’s a conceptual album and will be more metal. Saying a ‘little more’ wasn’t a very metal thing for me to say. I should have said, ‘We’re making you wait and you’re going to like it. You’re going to wait in the closet with your chains on!”