And All That Could Have Been (Nothing/Interscope) 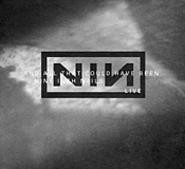 When he steps onstage, Trent Reznor trades the scalpel for the machete. In the studio, Reznor is obsessed with minutiae, compulsively fashioning and refashioning epic works of longing and despair with a surgeon's precision. Live, however, Reznor takes all the self-directed rage that drives his work, broadens its target, and comes out swinging. The audience becomes a bull's-eye, and Reznor hurls himself, his bandmates, countless smashed keyboards, and the very support beams that prop up his songs at this mark.

Such bedlam is palpable from the first note of And All That Could Have Been, where opening cut "Terrible Lie" is transformed from a spiteful dance-floor work-up into a lead-dense stomper with blood dripping from its teeth. Two tracks later, the once-pensive "Piggy" is subjected to the same (mis)treatment, with larynx-mincing screams and wailing, mournful guitars layered on top, making it exponentially more disquieting. And it's not just the tranquil cuts in the NIN catalog that suddenly grow fangs live; even the band's most combustible material somehow becomes more heated in the concert hall. The fevered "March of the Pigs" further devolves into a din of epithets and white noise; "Gave Up" is rendered a breathless, four-minute heart palpitation; and "Head Like a Hole" gets its bloody knuckles outfitted in brass.

All this sonic chaos is matched visually on the DVD that accompanies the collection. Using a series of handheld digital video cameras, rather than a professional film crew, Nine Inch Nails capture all the pandemonium of their performances in every jittery shot, every jagged camera angle. It all amounts to a package that truly adds something to one's understanding of this band -- which is rare for a live recording these days, making this set a cut above the competition. Literally.