Music as torture? Sound as weapon? The terrifying future is now. 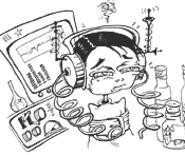 Annie Owens
Biochemists have traced grumpiness in human beings to a single gene. Provided you don't have it, sound is probably mostly enjoyable for you.

Unlike sensations such as odor, distasteful sounds are relatively easy to avoid or counteract in modern times; thanks to headphones, portable audio devices, white-noise machines, and earplugs, you can drown out just about anything your neighbor, snoring bed partner, or least-favorite trance DJ can throw at you.

Furthermore, there's an entire science, refined over millennia, of organizing sounds into every sort of fantasy the human mind can experience: We call it music. But because music and sound have a sort of special wormhole into our minds, they have long been explored for nefarious purposes as well. In fact, music has an evil twin: the science of organizing sounds into every sort of nightmare imaginable to the human mind. The only difference is that its research is carried out by governments and private industry, rather than rock bands. As a result, it gets very little publicity -- there's no press release issued for innovations in using sound to incapacitate the human body.

Such topics are, shall we say, a bit fringy, so getting verifiable information on sound-torture R&D is difficult. Sources on the subject are mostly polarized into the conspiracy-convinced Chicken Littles on one side and the debunkers and military-employed deniers on the other. But in the past year or two, culling the truth has gotten a bit easier, as the mainstream media have started to report on functional audio weapons, and more credible research has emerged.

In a famous scene from Stanley Kubrick's A Clockwork Orange, British psychiatrists use Beethoven's Ninth Symphony to program the mind of Alex, a juvenile delinquent, to abhor violence. Science fiction, right? Well, in the 2003 book Anthony Burgess: A Life, respected biographer Roger Lewis claimed to have solid evidence that Burgess, author of the original Clockwork novel, was in fact a CIA operative privy to the agency's real-life mind-control experiments. What Burgess called the Ludovico behavior-modification technique was apparently something he had actually witnessed.

The problem is that Lewis's source is a mysterious retired British agent who, of course, won't divulge his name. That's the best we get in this field -- the most trustworthy research is based on the testimony of anonymous sources claiming to be intelligence insiders. In the end, you're never completely sure.

The main exception is the work of conservative writer Gordon Thomas, specifically his Journey Into Madness: The True Story of Secret CIA Mind Control and Medical Abuse. Thomas actually names his interviewees, who include such famed CIA men as William Buckley (the Beirut bureau chief kidnapped by Hezbollah in 1984) and Allen Dulles, a former agency director. As a result, his story is the most credible account we possess of black-budget governmental noodlings with the human brain. He explains how televised statements from American POWs captured in the Korean War -- men who espoused pro-Communist ideas and appeared to be brainwashed -- frightened American intelligence into starting its own clandestine investigation into mind control.

To this end, the CIA launched the spooky MKULTRA project in 1953, which in turn funded the extreme and inhumane research carried out by American psychiatrist Ewen Cameron, then the president of the American Psychiatric Association and the most prominent psychiatric researcher in the world.

Dr. Cameron dedicated the basement of the psychiatric facility at Montreal's McGill University to breaking the human mind, and sound figured prominently in his techniques. According to Journey Into Madness, he never succeeded in achieving actual mind-control over any of his subjects. But the closest he got was with a process he called "psychic driving."

Dr. Cameron and his assistants would record interviews with patients confessing their darkest secrets, then create looped tapes out of the moment when the patients broke down. They were then forced to wear special football helmets outfitted with headphones that played back the sound of their own voices saying they had been molested or were hopeless alcoholics for 23 hours a day -- sort of like listening to Korn or Eminem songs without the music. The effect was profound stupefaction and complete withdrawal from the world, and when Dr. Cameron coupled the technique with heavy doses of psychoactive drugs, he could essentially keep a subject in a zombie-like state indefinitely.

Other accounts of sonic torture are also well documented and, thankfully, much less disturbing. For instance, music has been used tactically by the military and law enforcement for years. The feds reportedly blasted Christmas music and Tibetan chants at the Branch Davidians during the Waco standoff, and the army played David Bowie songs in an attempt to flush General Noriega from his hideout in the Vatican Embassy in Panama. More recently, interrogators in Baghdad have been blaring what they call "culturally offensive" songs such as Metallica's "Enter Sandman" at prisoners to force them to talk.

Indeed, using sound to fuck with people is quite the growth industry these days. A whole class of acoustic weapons, long speculated to exist by the conspiracy crowd, is now actually coming to market. American Technology Corporation, a high-end consumer-audio company, has created a weapon that fires "sonic bullets," narrow beams of sound that exceed the human threshold for pain by 20 decibels. It consists of a large speaker that can be mounted on a truck, loaded with 50 irritating soundtracks, such as a baby's scream played backwards. When pointed at a person, it causes a violent headache and stops targets in their tracks, without doing permanent damage to anyone's hearing -- or so American Technology claims.

Sound has long been studied in the now fashionable field of nonlethal weapons. With the U.S. military increasingly engaged in urban-warfare situations and riot control around the world, the Department of Defense has hungered for weapons that could essentially be "set to stun." So in 1997, it set up the Joint Non-Lethal Weapons Directorate (JNLWD), which has looked at all sorts of applications of sound as a means to control people harmlessly. But until the advent of American Technology, sound waves had been found largely ineffective, being difficult to contain -- the soldiers administering the blasts would also be affected. The sonic-bullet technology allowed the offensive sound to be focused on a single person, with others nearby left in silence.

The creator of the device and the company's CEO, Elwood Norris, says that both law-enforcement agencies and retailers are lining up to purchase the technology. According to ABC News, the company is in negotiations with "an unidentified beverage company" to develop technology that would project the sound of soda being poured over ice at an individual walking past a vending machine, to the exclusion of everyone else.

Scientific Applications & Research Associates, also an American company, offers competing products, such as the Multi-Sensory Grenade, which "combines sound, light, and odor to overwhelm four of the senses," according to its website. SARA also offers the Directional Sonic Firehose, capable of generating a "supersonic vortex of air" that can knock a person down. And apparently there are even spookier gadgets to come. Writer Jack Sergeant, of the skeptic's conspiracy-mag Fortean Times, dug up a U.S. patent issued in 2000 for something called the "Subliminal Acoustic Manipulation of Nervous Systems . . . a nonlethal weapon to cause disorientation and drowsiness in law enforcement situations."

Some students of military-technology trends suggest the real future of sonic weaponry lies in sounds inaudible to the human ear. Research has shown that frequencies higher than we can detect (ultrasound) and lower (infrasound) can have profound effects on the body. Infrasound has been said to produce particularly dramatic physical maladies, but here again, sorting the bona fide from the bullshit is difficult.

Other persistent rumors about the power of these phantom sound waves are even juicier. The proto-industrial band Throbbing Gristle claimed to have forced bothersome neighbors to move out of the flat adjoining its East London studio by generating ultrasound. A French robotics researcher named Dr. Gavreau is said to have built a colossal organ that created infrasound and rendered him and his staff ill for days after testing it. One of his assistants was supposedly even killed by a giant whistle they manufactured, "his internal organs . . . mashed into an amorphous jelly by the vibrations."

But on a brighter note, the effects these secret sounds have on humans are apparently not all horrendous. Still other stories tell of a mysterious device called the "Feraliminal Lycanthropizer," capable of producing a specific infrasound that increases mental functioning and loosens one's inhibitions. One writer claims to have discovered a 1921 lab journal of a Dr. Robert Hutchins, professor of chemistry at the University of Michigan, who wrote that the machine was brought to his house and used incognito at cocktail parties. In one instance, he dutifully recorded, a female guest stripped off her clothes and joined a married couple "in an absolutely deplorable ménage on the living room floor," forcing him to conclude that the machine was "a fundamental pivot between man and beast . . . which may serve to emancipate overly fragmented personalities from restrictive conditioning . . ."

Hey, turn that one up.