With Its New Album, the Latin Alternative Band Café Tacvba Goes Back to Basics 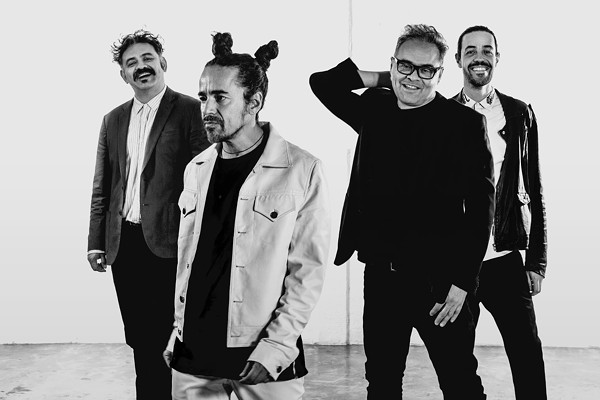 Courtesy of Paul Dryden
When Café Tacvba formed in the late ’80s, the Latin alternative rock scene was still in its early stages. At best, Café Tacvba could hope to play clubs. Arenas seemed out of reach.

“There wasn’t a choice for us to play in the club scene,” says bassist Enrique "Quique" Rangel from a Salt Lake City tour stop. The group performs at 7 p.m. on Friday at the Agora Theatre. “It wasn’t like that. We couldn’t aspire to play to more than a 1000 or 1500 people. When radio stations and promoters started to discover these songs, it began to grow and was considered Rock en Espanol in the United States. That’s how we got signed to do our first record.”

The Latin alternative movement expanded and while Café Tacuba might not play arenas when it comes to the States, the group has a huge following in Mexico and throughout South America. Over the course of its nearly 30-year career, it's received international acclaim and even won a Grammy.

Looking back on it, Rangel says the group’s self-titled debut fell short of expectations and didn’t capture the energy that the band brings to the stage.

“We wanted to be a semi-acoustic band that had elements of the drum machine to provide us with something that started to be a leitmotif in our music, which is a contrast between traditional folk influence and the technological or international sound,” he says.

Producer Gustavo Santaolalla (Maldita Vecindad, Juanes), who saw the group play in Mexico in the early days, would become the key to perfecting that approach. With the group’s second album, Re, the concept came to fruition.

“We weren’t that satisfied with that first record since it lost a lot of the raw sound that we used to get at our concerts,” says Rangel. “It was too clinical, we thought. When we started working on Re, [Santaolalla] took respect of those things, and we were much more comfortable in the studio. We started to identify the studio as a tool and a weapon and figure out how more than half of the songs were composed in the rehearsal room. From Re until now, we have developed our relationship with Gustavo. He’s our teacher and friend and someone who can make the remarks that nobody else could do. It’s not personal. It’s work. The one who benefits is not one of us but our music and concept.”

Last year, the group released Jei Beibi, its first studio release in five years. The album encapsulates both the punk-like energy from the early days and the headier approach it often now takes. The single “Que No,” for example, begins as a gentle folk ballad before drums (courtesy of guest Joey Waronker) and Hammond organ (courtesy of guest Meme) kick in, giving the tune a '70s feel.

“The approach was that we got back to Ground Zero and decided it would be like an album we used to a long time ago,” says Rangel. “The album before this one was a live recording with an audience. The one that came out in 2003 involved lots of producers. This is the first record we did by ourselves independent of any label since the last was the last of the Universal contract. We just wanted to make a record like the ones we used to like. It has a narrative and an arc of development.”

Rangel says that after the band’s third album, the band established itself as “an evolving force.” As a result, he says he’s regularly surprised by what his bandmates bring to the table when the group begins to work on a new studio album. That element of surprise provides continual motivation.

“When we re-arrange the songs we bring into the studio, I am surprised by how they become bigger and go in directions I never imagine,” he says. “The last time I heard the record, I was very proud of the music we were doing. That keeps me motivated. As work, it’s tiring, and you have to make some sacrifices like not seeing your family for more than one month. There wasn’t a chance for this to become our way of life before, but it’s a nice surprise that we are still here after all these years.”