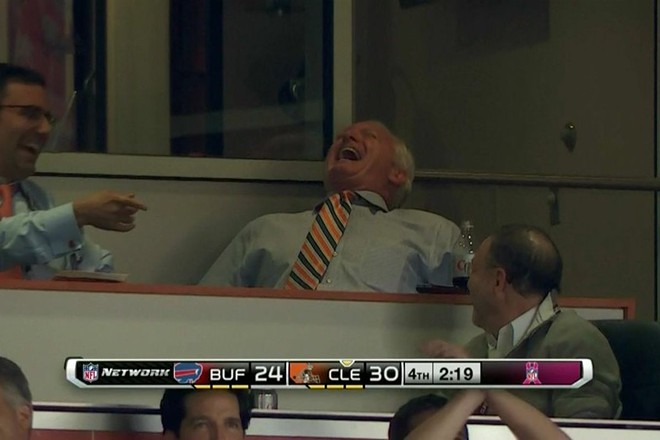 The Cleveland Browns on Sunday confirmed that the team traded for Deshaun Watson, who is the subject of 22 civil lawsuits from women who allege he sexually harassed or assaulted them during massages.

The announcement was accompanied by a statement from owners Dee and Jimmy Haslam, the content of which was meant to justify the trade and attempt to assuage any lingering feelings of disgust in fans who would have preferred the team simply choose not to acquire the quarterback given the heinous allegations.

It was, in the vein of any crisis PR statement, lengthy without saying much. The alternatives couldn't have been attractive, of course. "We own the team, we don't care what you think, we only want to win," while having the benefit of being true, lacks the obfuscation and faux introspection necessary to give the impression that the Haslams are anything but morally bereft.

Still, the statement is worth examining, not least because it fails to mention whether the Haslams believe there's merit to the allegations, an omission that says a lot more than anything they actually said.

"We spent a tremendous amount of time exploring and investigating the opportunity to trade for Deshaun Watson."

"Investigating" is doing the heavy lifting here, and whatever PR team crafted the statement probably felt it was imperative to get that word in the first sentence. But even those who have long ago forgot sentence-diagramming lessons from grammar school can see it's lifting phantom weight. They investigated the opportunity to trade for Watson, not any of the allegations, which is to say they considered trading for him, like they would consider trading for anyone else. Also throwing "opportunity" in there is some bizarre positive connotation discordant with the subject matter at hand.

"We are acutely aware and empathetic to the highly personal sentiments expressed about this decision."

Well, of course they're acutely aware, as they own the team that was exploring trading for him. The phrasing, though, wants to make it seem like the situation is somehow deeply personal to them beyond making a decision about their football team. They're "acutely aware" in so much that they've been bombarded with reaction from fans who are deeply disappointed and have said they will either no longer root for the team or do so from a deeply conflicted place. Those "highly personal sentiments" are acknowledged in a gesture toward being human beings with actual empathy, but the implied follow-up to this sentence belies how empty the gesture is. Because what is unsaid but comes next is, "But we don't care, obviously. And we assume enough people also don't care or won't care soon enough that we'll face no substantive financial or reputational harm. Jimmy wants a ring, you can keep tweeting if you want."

"Our team's comprehensive evaluation process was of utmost importance due to the sensitive nature of his situation and the complex factors involved."

The evaluation process was so comprehensive that it didn't include speaking to any of the women or their lawyer.

"His situation," as used here, is passive bullshit, as if he stepped on some broken glass at the beach by accident. And the "complex factors" involved, so far as anyone can tell, amount to little more than the question of how soon he can be on the field and how much money he stands to lose if the NFL issues a suspension of any length. The team did its part to ensure Watson loses as little as possible, of course, by restructuring his deal so that he'd only lose about $55,000 per game for any suspension in the 2022 season. God bless the front office for navigating these complex waters.

"We also understand there are still some legal proceedings that are ongoing and we will respect due process."

Well, they have no choice but to do that? But it's cool they wanted to tell everyone they won't interfere in the civil lawsuits???

"It was pivotal that we, along with Andrew Berry and Kevin Stefanski, meet with Deshaun to have a straightforward dialogue, discuss our priorities, and hear directly from him on how he wants to approach his career on and off the field. He was humble, sincere, and candid. In our conversations, Deshaun detailed his commitment to leading our team; he understands and embraces the hard work needed to build his name both in the community and on the field. Those in-depth conversations, the extensive evaluation process, his dedication to being a great teammate and devotion to helping others within the NFL, within the community, and through his charitable initiatives provided the foundation for us to pursue Deshaun."

Not included anywhere above: He said he's innocent and we believe him.

Included at length: We wanted to make sure he's good at football and that's what matters. And by build his name we mean rebuild his name, because we're going to need his help in getting as many people as possible to forget about all of this as quickly as possible.

"We are confident in Deshaun and excited about moving forward with him as our quarterback and supporting his genuine and determined efforts."

His "genuine and determined efforts" to what, exactly?

To play quarterback, of course. The only thing that matters.