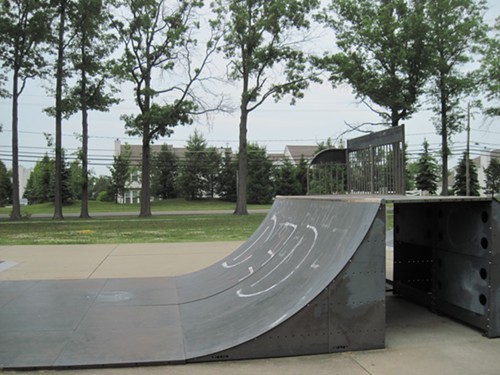 James Pietrangelo does not enjoy living across the street from Weiss Field and its popular skate park in Avon Lake. He first filed a lawsuit against the city last September, in which Pietrangelo sought the total annihilation of the half pipe, ramps, rails, etc. But to further illustrate his anger, Pietrangelo has taken to harassing the people who skateboard there: allegedly filming them, screaming at them, punching at least one of them and rather transparently threatening to shoot them.

On June 1 of this year, Pietrangelo told an Avon Lake police officer that the city’s supposed inaction with respect to shutting down the skate park was “forcing him into a George Zimmerman-like state,” which is about the most intense allusion one could make in this year of our lord 2014.

Avon Lake resident Cris Lesh, 18, and about eight of his buddies were hitting the ramps this week when Scene stopped by to figure out what’s so horrific about this skate park. They immediately knew about “this guy with the lawsuit,” and Scene quickly confirmed its suspicions there was nothing horrific about the park at all.

Essentially, they and dozens more in the area have been faced with a steady barrage of harassment from Pietrangelo, particularly since last summer and his lawsuit filing in the fall.

“We’re just doing what the park is meant for,” one of the other skaters said. Nonetheless, they all said, police officers roll by the park “every 15 minutes,” either following up on another Pietrangelo call or simply lending a watchful eye for the safety of the residents.

“He’s causing more of a problem than we are,” Lesh said. Seems so. The skaters told Scene that Pietrangelo often stands across the street or oddly off to the side of the park and films their activities. That’s enough to creep anyone out, particularly when younger children happen to wander over from the nearby playground and into the lens of one James Pietrangelo. Lesh said that all the weirdness has actually caused more families to show up at Weiss Field this summer, seemingly in solidarity against this guy’s obsession.

More to come on that near-constant front to be sure, but the Avon Lake situation interestingly isn’t the only such case of menacing on the westside. In Lakewood, the city shut down Kauffman Park’s basketball courts beginning in the last week of May, citing a “credible concern for public safety near the park.” That’s suburban talk for “credible concern for black people showing up.” The courts, installed four years ago and enveloped by sound barriers, have rankled nearby neighbors from the get-go.

In 2010, Scene published a feature on the morose state of neighborhood basketball courts, focusing mainly on Lakewood’s systematic dismantling of same. Two months later, the Kauffman courts were up. Today, they’re gone. In between came near-constant use of the courts, evidenced via basketball being played at all hours of operation, and a steadily growing surge of harassment from neighbors who rallied against the courts at every opportunity. Last summer, Lakeland Avenue resident David Heller was convicted of disorderly conduct after he approached several seventh-graders who were playing basketball after hours. According to the police report, Heller had been “yelling at the kids to get the fuck out of the park and that he has lived there all his life.” No word yet on David Heller’s feelings about LeBron James’ decision to become a free agent, but we’ve got the odds at nearly 100 percent that he’s called into WKNR in the last 48 hours.