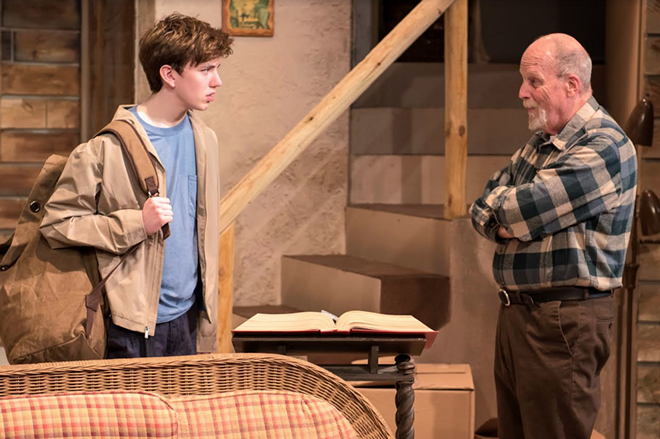 If you want to write a play about gay conversion therapy, focusing on one young man named Daniel who is sent to a cabin in the woods for counseling, it’s a bold choice to have that young man disappear for most of the play. In a metaphorical sense it’s an interesting decision because the whole concept of gay conversion therapy blithely ignores the individuality of each person subjected to that misguided and often heinous “treatment.” So what could better express that than having the person in question absent?

The trouble is, the absence of Daniel for the bulk of the proceedings waters down the dramatic impact of A Great Wilderness by Samuel D. Hunter, leaving us with a large pot of weak tea. In this Beck Center production, the cast under the direction of Scott Spence does its best to enliven the story. But as you watch you keep asking yourself: “Sure, I get it, but where’s the kid?”

The kid, as it turns out, has gone for a walk in the woods soon after his arrival at the cabin and his first meeting with the elderly lead counselor Walt, who is both a gentleman and a gentle man. Walt tries to put Daniel at ease, telling the high school student that he won’t electroshock him or force him to be who he isn’t. Walt just wants Daniel “to be the person you want to be.” Unless, of course, that person happens to be gay.

Once Daniel (played with sensitivity by Christian John Thomas) takes a hike, the play is left in the hands of Walt and his ex-wife Abby (Lenne Snively) and her husband Tim (Brian Byers), who will be taking over the cabin once Walt adjourns to an assisted living facility. When Daniel fails to appear after many hours and appears lost, or worse, his mother Eunice (a haunted Heidi Harris) appears to spill some parental bile. For a bit of humor, a park ranger named Janet (Kelly Strand) shows up to deliver no-nonsense advice to those in the cabin.

Hunter writes very naturalistic dialog and has a good wit, but these adult characters are playing tennis without an opponent. They all essentially agree with each other regarding the benefits of curing gay men and, as they keep lobbing or slamming their arguments over the net, there is no one on the other side to return serve.

Sure, they have their own internal conflicts. For instance, Walt ponders whether he actually ever “saved” any young gay man from the terrors of gaydom. And he contemplates his own life, as a man who felt gay urges but who denied himself that option. In this role, Tim Tavcar exudes enveloping kindness towards Daniel even as he flashes anger at Abby and others, but the script defeats him at every turn. It isn’t until the end when Daniel finally returns that the play perks up, but then it’s over.

One could quibble about director Spence’s deliberate pacing throughout, but that would avoid the central problem of A Great Wilderness: It’s a drama with the drama expunged, leaving ancillary conversations in its place.