Board Responsible for Reviewing Complaints About University Circle Police Did Not Do So in 2020 or 2021, Lawyer Says

In advocating for legislation to expand his police department’s jurisdiction to Little Italy, University Circle Police Chief Jim Repicky told Cleveland City Council members how the department responds to residents' complaints about police conduct. It's a process outlined in the agreement that University Circle Inc. (UCI) signed with Cleveland in 2018 requiring complaints to be reviewed by a board of civilians.

What Repicky didn't tell council members during the mid-April meeting is that the department didn't follow that process for complaints filed in 2020 or 2021.

Cleveland safety officials, as well as several council members, have endorsed the pending legislation, calling it a “force multiplier” for the University Circle and Little Italy neighborhoods, which draw 50,000 visitors and workers to the area each day. Similar legislation, if passed, would also expand the jurisdiction of the Case Western Reserve University (CWRU) police department to include Little Italy and a residential slice of Glenville from E. 105 Street to E. 120 Street reaching north to Ashbury Avenue and south to Wade Park Avenue. 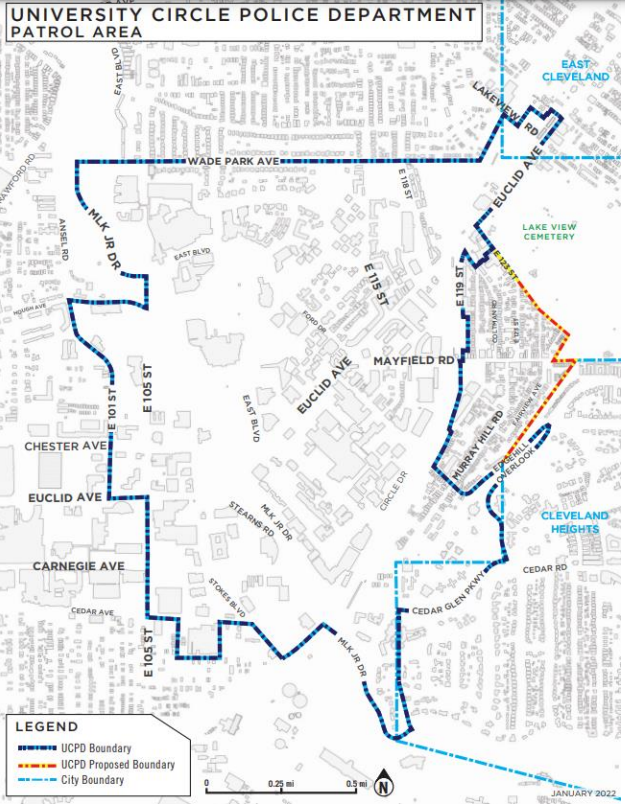 Some council members and residents have raised concerns about how the private police agencies, such as those of UCI and CWRU, will interact with residents, particularly young people, and whether they will be required to follow the same rules for training, use of force and responding to complaints put in place for Cleveland under the U.S. Department of Justice Consent Decree and the recently passed ballot initiative, Issue 24.

The agreements, or memorandums of understanding (MOUs), are meant to set expectations and ensure consistent protocol among the Cleveland Division of Police (CDP) and the private departments that they partner with. They date back decades — 1992 for UCI and 2007 for CWRU — and both have been amended previously.

The city’s agreement with UCI was amended in 2018 to “further the goals of constitutional and effective policing, address training of UCI Officers and Dispatchers, certain UCI Police Department policies, and complaint handling,” according to the legislation.

Repicky laid out the complaint-handling process during the two-hour April 13 Safety Committee meeting. It includes the use of an outside investigator to look into complaints about officers and a review by a civilian board that “will sit down and discuss the findings of the investigator, and then they make a judgment on the case.”

The UCI Police Department received two complaints in 2021 “and the same in 2020,” Repicky told council members.

Cleveland Documenters requested copies of complaints the board received and reviewed in each of those years, as well as how they were resolved. Kevin Butler, legal counsel for University Circle Inc., responded in an email that there were no records that satisfy the request.

After a reporter pointed out that Repicky stated the number of complaints in a public meeting, Butler wrote:

“I confirmed the review board has not been trained yet to conduct investigations into citizen complaints against the police department, and that the scheduling of this training is underway. As such, the board has neither received nor reviewed any complaints in 2020 or 2021.”

Butler’s response about UCI’s complaint board is similar to what ProPublica was told two years ago. In its September 2020 story about racial bias among several Cleveland private police forces, ProPublica reported that UCI was still in the process of establishing its complaint board as required by the 2018 agreement, which gives it 90 days to do so.

Council Member Kevin Conwell (Ward 9) told Cleveland Documenters he wasn’t too surprised by the board not being trained in 2020 and 2021 because of UCI police behavior described in the ProPublica report, specifically the fact that 88 percent of the nearly 2,000 drivers cited by UCI police since 2015 were Black.

Regardless, the legislation is needed based on a safety-first principle, Conwell said.

“My job is to protect people that live, work and travel through the City of Cleveland,” he said, adding that he constantly hears from neighbors about gunshots and once had to fend off someone trying to break into his home. “I want [the legislation] because I need safety for my residents.”

Oversight and accountability are needed, too, he said, from council and from the Department of Public Safety.

In an April 27 Safety Committee meeting, where discussions of the legislation resumed, Council Member Charles Slife (Ward 17) asked what options the city had if an agency were to deviate from what’s written in their MOU. Director of Public Safety Karrie Howard said it could choose to end the MOU, which he views as agreements of mutual aid.

“It’s logical to assume that the reason we are in these MOUs is that our partners foresee a need or a time that they will need us to assist as we will need them to assist,” he said in the meeting. “That need creates the obligation for us to be in compliance with the agreement that we have.”

The Department of Public Safety, which proposed the expansion legislation being considered, did not provide comment for this story. The agreement with UCI is set to expire Dec. 1.

Council Member Mike Polensek (Ward 8) also told Cleveland Documenters that accountability is crucial. And with several private police agencies operating in the city, a uniform adherence to Cleveland Division of Police (CDP) policies — including body cameras, oversight, and providing due process to citizens with complaints — is needed, he said.

“That was one of the reasons why the Justice Department came in here; the citizens were not treated right and fairly,” Polensek said. “And so I think we’ve made good progress. But are we where we need to be collectively, not just within CPD, but with all these outside agencies? No, I don't believe we're where we need to be at this point.”

Polensek, in the April 27 meeting, reiterated the need to make sure all future MOUs require private police departments to adhere to the same policies CDP does, including the consent decree, for the sake of accountability and transparency.

The committee approved the UCI and CWRU legislation, with amendments that would require the director of public safety to report quarterly to the committee about the police agencies’ activity in their jurisdictions. Both emergency ordinances would still have to be approved by the Finance, Diversity, Equity and Inclusion Committee and then voted on by the full council.