Arbitrator Rules Michael Brelo Should Remain Fired For 2012 Police Chase and Shooting, But Five Other Officers Will Get Jobs Back 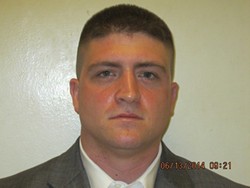 Michael Brelo.
Eight months after six Cleveland police officers took their cases to arbitration after being fired for their actions during the police chase of Timothy Russell and Malissa Williams that ended with both suspects dead in a barrage of 137 bullets, an arbitrator ruled this week that while Michael Brelo should remain fired, the other five officers will get their jobs back.

According to Cleveland.com, arbitrator William Heekin said that while the five officers were at fault that day, they had otherwise been good members of the force.

Mayor Jackson reacted, saying in a statement he agreed with Heekin's ruling on Brelo but not the others.

"We are pleased that the arbitrator confirmed the severity of the violations committed by the officers and that he upheld the termination of Officer Brelo and that he upheld the lengthy suspensions for the six officers who the City had not terminated," Jackson said. "We believe that the City's decision to terminate the other five officers was justified and should have been upheld. We acknowledge that the arbitrator concluded that those officers committed serious policy violations; however, we are reviewing our options regarding the officers whose terminations were not upheld."

Wilfredo Diaz, Brian Sabolik, Michael Farley, Christopher Ereg and Erin O'Donnell will be reinstated without back pay. A host of others still face suspensions and misdemeanor charges.

(Updated 10/18/16): Michael Brelo and five other officers who were fired by the city for their roles in the 2012 police chase that ended with police firing 137 bullets at Timothy Russell and Malissa Williams are trying to get their jobs back.

Their dismissals came nearly three years after the incident. Appeals were filed back in January, the day they were fired.

Brelo was the lone officer to be indicted by a grand jury with a felony. He was later acquitted by a judge. The other five fired officers are Wilfredo Diaz, Brian Sabolik, Michael Farley, Christopher Ereg and Erin O'Donnell. All six are currently in arbitration hearings with Cleveland, city officials told Cleveland.com.

A little historical perspective here, via that account, and a look forward:

In 2013, the city handed down discipline to a dozen supervisors and 74 officers involved in the chase.

The supervisors that were fired had their jobs reinstated through the arbitration process. Other disciplinary actions against supervisors were lessened or completely rescinded.

(Original story 1/26/16): Michael Brelo and five other Cleveland police officers have been fired for their roles in the Nov. 29, 2012 police chase and shooting that resulted in the deaths of Timothy Russell and Malissa Williams. Six other officers will face suspensions ranging from 21-30 days.

Safety Director Michael McGrath (who was police chief at the time of the shooting) announced the disciplinary charges in a press conference Tuesday afternoon. He said he hoped the announcement would "bring closure" to the incident, at least on the city's end.

Sgt. James Chura outlined the administrative review of both the pursuit itself and the shooting.

"Why did it take so long?" Chura asked. "This incident was unprecedented. It took an equally unprecedented investigation...to reach an adequate appraisal."

The cascade of 137 shots was dramatized in a video on a model created by the County Prosecutor's office.

In a nine-minute narrative, the video explicated the actions of all 13 officers who discharged their weapons in the Heritage Middle School lot in East Cleveland. During the course of a 10.1 second window that night, 122 of the 137 shots were fired.

After a grand jury voted to indict officer Michael Brelo, and after he was subsequently acquitted in May, 2015, the police department began their administrative process to investigate the 13 officers.

The Critical Incident Review Committee that had examined the pursuit was re-convened to examine the shooting. The committee completed their review in September, 2015 and presented their findings to Chief Calvin Williams in a report. Williams concurred with their findings and recommended charges to Safety Director McGrath. (Any disciplinary action more severe than a 10-day suspension must be approved by the Safety Director).

McGrath agreed to charge all 13 officers, though dismissed a charge or two from many of the offending officers. Brelo, for instance, was charged on six counts (violating general police orders relative to the chase and firing his weapon). McGrath sustained four of them and dismissed two.

"It was very difficult," McGrath said, of the disciplinary decisions. "I arrived at my decision based on the Critical Incident Review Committee. [They] put their heart and soul into this to get it right... We did not go through the motions on this."

Chief Calvin Williams said that the six suspended officers were still likely a long way from serving the community on the streets of Cleveland, but that he's confident training and protocol within the division has been sufficiently improved over the past three years that an event like this will not happen again.