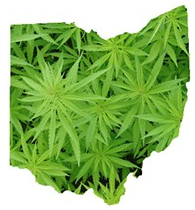 Councilwoman Dona Brady was the lone dissenting vote. She felt the restrictions did not go far enough.

The restrictions roughly match those imposed by the state of Ohio, in rules completed this summer after medical marijuana was legalized last year. The biggest restriction is that operations are prohibited within 500 feet of schools, parks, churches and libraries.

(Cleveland.com reported that Councilwoman Brady initially wanted a 1,000 foot buffer, but Cleveland Planning Director Freddy Collier said that that would make operations all but impossible. With the 500-foot buffer, 95 percent of the city is already off-limits.)

Additionally, the marijuana operations will only be permitted on properties zoned as a general retail district or zoned for industry. Operations are prohibited in local retail and residential zones.

Via the state's legislation: Ohio will allow 24 growers and up to 40 processors to make marijuana oils, patches, topical lotions, capsules and edibles. Cuyahoga County can have up to five dispensaries.