Customers Explain Why You Should Never Fly Spirit Airlines, the Slumlord of the Skies 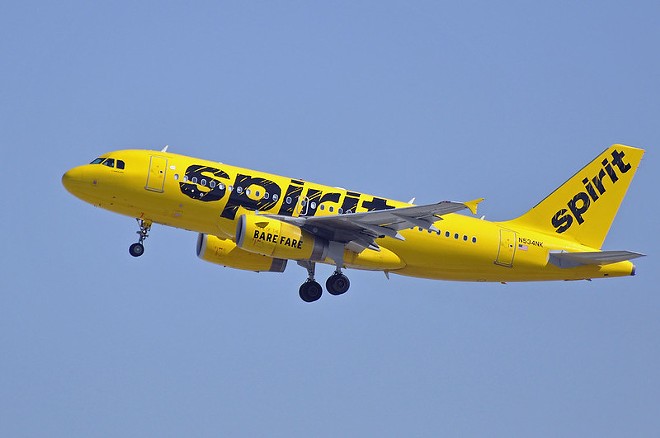 Eric Salard/FlickrCC
Spirit, not the best airline you will ever fly

If you read between the lines, Jessica A wasn’t pleased by her recent encounter with Spirit Airlines.

“THE ABSOLUTE WORST AIRLINE!!” she wrote on Yelp. “On our way to Michigan with a rental car for $600 at 1 a.m. after being delayed when the Spirit check-in closed at 10 p.m. when the flight was at midnight in Cleveland!! NO reimbursement, no refund, no flights for two more days available!!!!! Fifty-plus people waiting to check in at 10:07 p.m. (two hours before departure) and they refused us all!!! DESTROYED PEOPLE’S VACATIONS, TOOK THEIR MONEY, TIME!! NEVER FLY THEM AGAIN!”

This may be one of the kinder reviews Spirit has received lately. The airline, which operates out of Cleveland Hopkins International and lesser points beyond, has canceled thousands of flights this month. Passengers report waiting at gates for no-show crews, spending hours in line hoping to speak with customer service, and being “held hostage” for days on end at airports far from home.

Take the mom who flew with her three kids to New York, where her seven-month-old was treated for heart problems. Her flight home was canceled. Spirit refused to put her on another airline or provide meal or hotel vouchers. She took refuge at a $300-a-night hotel, only to see another flight canceled. Once, she waited on hold for three hours in the middle of the night, then disconnected.

All told, she was stranded for five days and spent $1,600 on hotels. Still, Spirit had the audacity to make her pay extra for assigned seats so she could be with her kids when she finally flew home.

Think of Spirit as a slumlord circa 1920, only airborne. Its modus operandi is cheap fares on the front end, with a blizzard of fees on the back. It then skimps on everything – except executive pay, of course – to provide a travel experience just this side of intolerable.

Pilots describe an infrastructure built to handle a company one-third its size. Computer systems crash. Customer service lines go dead. Spirit doesn’t always know where its flight crews are, which is why they’re not showing up at your gate. There’s a good chance they’re stranded somewhere too.

A company like this naturally runs on the backs of employees. Flight attendants make just $32,000 a year. That customer service rep who quit with 100 people waiting in line? She makes $13 an hour. Forgive her if poverty-level wages won’t compensate for another day of abuse from the rightfully furious.

At one point, Spirit even asked employees to volunteer on their day off to help passengers stranded at its Fort Lauderdale base. Yes, a billion-dollar company assumed minimum wage workers should compensate for its alligator arms. To which the flight attendents union responded: "Why get abused for free when you can get paid for it?"

The irony: For all the damage Spirit inflicts on customers and employees, those same ingredients make it one of the World’s Most Admired Companies, according to Forbes. In the eyes of the boardroom set, this is what constitutes a model corporation.

Officially, Spirit vaguely attributes its troubles to “weather,” “operational challenges,” and “staff shortages.” There is another term often used for these situations: “fraud.” When you take someone’s money and fly them to Orlando – knowing full well you can’t get them home – this would seem an apt description. Yet in America, fraud committed at the corporate scale is more politely known as a “service disruption.”

Customers clearly think otherwise. On Yelp, Spirit receives an average one-star rating. It gets the same from the Cleveland Better Business Bureau.

Emma Wareus is among the lucky. She only spent 30 hours stranded in Puerto Rico before paying American Airlines $1,300 to rescue her. Her fellow travelers weren’t so fortunate.

"They couldn’t afford to pay for another ticket and slept in the airport because they also couldn’t afford another night at a hotel," she told Fox Business. "Other passengers were helping them with basic necessities as Spirit agents did not come into work that day."

Robin Wilson, seven months into a high-risk pregnancy, was stuck at Los Angeles International for four days, unsure when she’d make it back to Cleveland. Informed of her condition, customer service suggested she get a hotel room. But Spirit didn’t offer to pay. Wilson couldn’t afford one.

Another woman was stranded in the Virgin Islands with three kids and her parents. The airport closed. She couldn’t find a hotel. Eventually, after a three-hour wait in line, Spirit surprisingly booked her a flight home on Southwest. But when she showed up at the gate, there were no tickets to be had. Spirit never told Southwest of the arrangement.

Tracey from North Royalton had a 20-year-old daughter stuck in LA. Her flight to Cleveland was canceled at the last minute. “You offered her NOTHING!” Tracey wrote on Yelp. “Not a hotel room, refund, rental car, etc… She had to call off from her jobs for the entire week and will most likely lose her jobs because of you… What is wrong with you?!”

Count Kendall from Broadview Heights was in the same boat. Her flight home was “delayed by 2+ hours, then when we were all waiting at the gate to board there was not a single attendant there. Thirty minutes after we were supposed to board we got a notification on our phones that the flight was cancelled. Everyone left to go get the flight rebooked/refunded and there was not a single employee there. We all waited for about an hour for anyone to come, then the police/TSA made an announcement that no one would be coming tonight and we had to figure it out on our own and try to contact customer service, which you can't reach. Had to pay a ton of money to get on another airline and still no refund.”

Travelers have little recourse. Under U.S. law, they’re entitled to refunds if flights are cancelled or significantly delayed. In countries that care about their citizens – such as Canada and those of the European Union – the rest is governed by uniform rules. But in America, airlines spend $105 million annually on lobbying. You do not.

So your “rights,” if they can be called that, are buried in a mound of legalese known as a “contract of carriage.” Spirit’s is 54 pages. The Cliffs Notes version: No matter how bad we bone you, you were dumb enough to fly Spirit. And that’s on you.

If they’re lucky enough to get the airline on the phone, most passengers say the best Spirit offers is a $50 voucher for a future flight, regardless of how much they spent trying to make it home. Yet making use of said voucher entails the unthinkable: Actually booking another flight on Spirit.