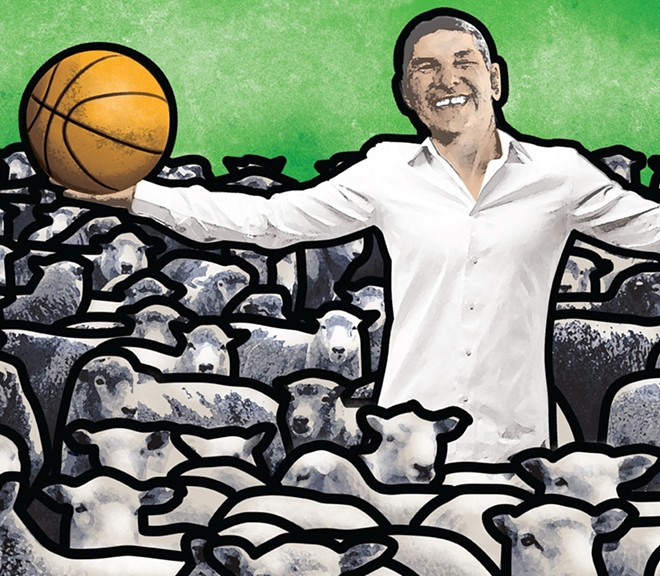 Illustration by Tom Carlson
A group of advocates in greater Akron that has been pushing for accountability and transparency at Hudson's Christ Community Chapel in the wake of an international sexual abuse scandal sent a letter last week to Rob Portman. They have asked that the Republican Senator from Ohio open an official investigation into deposed pastor Tom Randall and his nonprofit World Harvest Ministries. Furthermore, they have requested that he contact the Filipino authorities and ask them to re-open the investigation they closed in 2014 due to pressure, advocates believe, from Portman and the U.S. embassy.

Back in 2014, Portman interceded on Randall's behalf when the longtime missionary was jailed in the Philippines on charges related to sex-trafficking. Orphans at the children's home Randall founded with his wife had testified to rampant sexual and psychological abuse there.

Portman helped secure Randall's release in response to a wave of support from Christians in the United States and a personal request from CCC lead pastor Joe Coffey.

"We fully believe that you had only good intentions in choosing to intervene," the Justice for Sankey Advocates wrote Portman, (full letter below), "and that you had no intentions of disrupting the [Filipino National Bureau of Investigation's] investigation. Nevertheless, we believe that Tom Randall intentionally deceived many individuals in regard to the abuse perpetrated upon the orphans and that he arranged for the funding of the bail, legal defense, and general living expenses of Perfecto Luchavez. We believe that this financial support, which resulted in the prohibited private inurement of funds governed by Internal Revenue Code Sec. 501c3, directly resulted in the victims giving up on the Philippines justice system in late 2016 when they stopped showing up to court after realizing that they would have to attend years of court proceedings before anyone would see jail time. This then resulted in charges being dismissed against Perfecto Luchavez, who continues to intimidate the victims into staying silent."

The Justice for Sankey Advocates sent the letter to Portman because of recent brazen actions by Randall. According to CCC, Randall was forced to resign in June when church leaders learned he'd falsified an email supporting his version of events in the Philippines. (Scene has questioned the official timeline. When we sought an interview with Randall, through a CCC intermediary, in mid-July, we were given no indication that Randall was no longer on staff.)

But shortly after Scene published an investigation into Randall's account, and the Akron Beacon-Journal covered CCC's "internal review" on the matter, Randall emailed his supporters announcing that he'd be launching a new nonprofit to continue his ministry. As CCC's internal review found, part of that ministry had included wiring regular payments to his friend, the abuser Perfecto "Toto" Luchavez.

In the email, Randall claimed that he had resigned from CCC in order to be "fully independent again." He lamented the fact that the financial assets of his nonprofit World Harvest Ministries, which has been under the fiscal control of CCC since 2014, could not be extricated from the church.

"Therefore, we are in the process of applying for a new 501(c)3 ministry with a new name," he wrote. "It is going to take us awhile to transition to this new ministry, so we are asking that you not send any more checks to World Harvest Ministries in Ohio. We hope to have a new address for you soon!"

Randall's email stunned many of the Justice for Sankey advocates, who'd been belittled and ostracized for years as they sought explanations for the inconsistencies in Tom Randall's story. The Akron Beacon-Journal reported this weekend that Randall and his wife Karen put their home in Stow on the market for $289,900 last month, and that CCC has launched an independent audit of the current World Harvest assets.

The advocates' letter to Portman, sent via certified mail on Sept. 3, included copies of Scene's investigation and the ABJ's piece on the CCC review, and a page with the names and addresses of 40 of the local advocates, all of whom, they noted, are Portman's constituents.

Portman's press office took a message from Scene, but was unable to promptly confirm that they had received the letter.