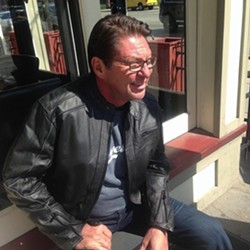 Twiter @fredgeis
Developer Fred Geis has stepped down from the Cleveland Planning Commission, Cleveland.com reports, after being counseled by his lawyers on the perils of conflicting interests.

We needn't remind you that Geis is a big shot local developer. (Also a physical specimen.) His most visible downtown project is probably The 9, but his Streetsboro-based firm has also been instrumental in the development of Midtown's Euclid Corridor as a tech hub.

In seven months on the planning commission, Geis has recused himself from decisions related to projects in which he's involved, but as an active developer, that happens quite a bit. And Geis now seems to understand that at this particular urban pastry shop, he can't develop his cake and eat it too.

His appointment, back in February, struck many — even the Pee Dee's editorial board — as improper:

"There's a big conflict of interest here and it's far more than perception," the Plain Dealer wrote about Geis's appointment. "Fred Geis, a Cleveland resident, owns several parcels of land in Cleveland and works closely with the city to craft public financing deals and to obtain low-interest loans for his projects. That seems at odds with a commitment to serve on an independent board that is supposed to protect the public interest...even if the interests of developers get hurt in the process."

The project that most directly impinged on Geis's decision, via Pee Dee real estate ace Michelle Jaboe, was the Link59 office building in midtown, a building that Geis plans to open for business in 2017, hopefully with more than zero tenants. But the more frenzied local uproar arrived after news leaked that Geis was involved in a proposed outlet mall at Burke Lakefront Airport, a project derided by all but the developers as a hideous oozing eyesore and a golf club to the temple of  downtown urban progress.