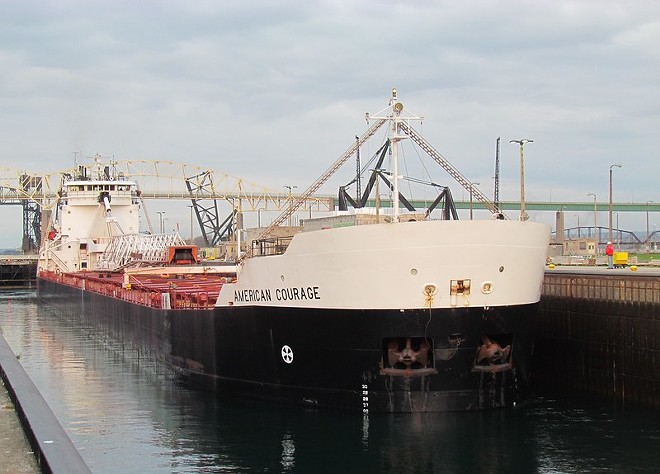 The American Courage, a 634-foot Great Lakes bulk freighter carrying limestone from Marblehead to Fairport Harbor, ran aground about 100 yards from shore on Sunday and remains stuck today.

Two tugboats have so far been unable to get the freighter moving and the Manitowoc, a laker, was called in to assist in offloading cargo to lighten the ship.

No injuries were reported, according to the U.S. Coast Guard.


After being retrofitted in 2020, American Courage became the largest ship to perform automated docking and dock-to-dock navigation, a move made by its owner, the American Steamship Company, to allow the ship to better handle the windy path of the Cuyahoga River.

“This is not about going captain-free, rather, enhancing the capabilities of onboard crew as they traverse shuttle routes, congested or restricted areas,"  John Marshall, Senior Business Development Manager, Automation & DP; Americas, for Wärtsilä Voyage, the company that installed the technology, said in a release that year. "When vessels must operate twenty-four hours a day, seven days a week, we are pleased to offer an automated dock-to-dock transit solution that ensures every trip is conducted safely.”

Officials haven't said what caused the ship to run aground but report there have been no signs of pollution.