Guarded: How the Media Struggles to Cover Delonte West 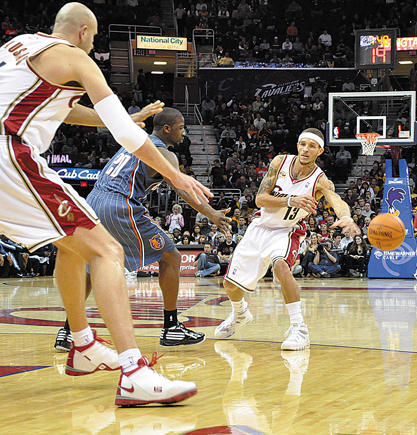 There are no best practices or guides for dealing with an athlete with a diagnosed mental illness.

The Cavaliers have been patient with Delonte West. Every decision regarding their talented but troubled guard is made with caution because, although they dealt with West last year, the situation is an unfinished puzzle of doctors, coaches, front-office execs and counselors. There is no rulebook for how to proceed, and greater sensitivity is needed with a player who is sick and not simply acting out, sitting out or misbehaving for contractual or professional reasons.

The organization and the league aren’t the only ones in uncharted waters. The media that regularly cover the team are in a similar position. How do you couch analysis or report information when the affliction is mental, not physical? The brain, not a knee? With little to report other than West’s whereabouts and official status with the team, reporters are left with judgment calls that journalism school didn’t cover.

Take an incident that happened October 6, before the Cavs squared off against the Bobcats in a preseason matchup.

Reporters were in the locker room waiting to talk to LeBron. According to multiple sources who were in the room, a reporter said hello to West, and West responded angrily with expletives. West had dressed for the game and warmed up with teammates earlier in the day, but after the outburst, he did not join the Cavs on the floor for the game and shortly thereafter took an excused absence from the team.

After the outburst, the 10 or so reporters present discussed what had occurred and agreed not to write about it, and to date nothing has been reported by local dailies or TV or radio stations.

Brian Windhorst’s story in the Plain Dealer said only, “The Cavs planned to play West and he warmed up and was in the locker room before the game. However, it was determined he wasn’t quite ready and was a late scratch. West declined to speak to the media before the game. Anthony Parker started at shooting guard. West is going to be away from the team for a few days to handle personal business, and the absence is excused.”

The Associated Press story by Tom Withers stated, “Cavaliers guard Delonte West, battling mental sickness and legal troubles, had been expected to play 15 to 20 minutes but didn’t leave Cleveland’s locker room. He warmed up 90 minutes before tip-off and sat in his cubicle before the game, but never joined his teammates on the bench.”

AOL’s Fanhouse reported this much: “West, who hasn’t talked to reporters since the team’s media day Sept. 28, got testy before the game when reporters attempted to interview him and wouldn’t comment.” Examiner.com’s Matt Loede blogged about rumors of an incident between West and the media.

StepienRules.com, a Cavaliers blog, went the furthest. Glenn Moore wrote: “According to sources, media covering the game were in the Cavaliers locker room. As players were getting ready for the game, one unnamed national [Associated Press] writer said hello to West. West allegedly replied with an expletive. West was then pulled from the room by players and coaches. This incident led to West being pulled from playing and being excused from practice the next day. West has yet to return to practice and the Cavaliers are saying he still needs more time and space.”

But Moore later deleted the post and hasn’t explained why. Off the record, sources say the team claimed it was inaccurate. But two people who were in the room during the incident confirmed Moore’s account for Scene.

Scene sought comment from reporters who witnessed the exchange, but none would not comment on the record about specifics. More than a couple responded with "leave me out of this"-type comments. Privately, some who cover the team admitted that they did not agree with the decision to squelch the information. The phrases “delicate situation” and “unchartered territory” came up a lot.

“In my seven years on the Cavs beat, this has probably been the most complicated story to cover after Carlos Boozer’s leaving in free agency,” says Windhorst, speaking broadly. “Last year, partially out of respect for [West’s] battle and because he was so open with us when he returned to training camp, the media protected him to a certain degree. I have never been close to someone who is bipolar, but I read a lot about it and I talked to many professionals about it in trying to understand what Delonte goes through on a daily basis. Because of that, I’m inclined to give him some space even when it goes against journalistic instincts.

“Last season, I was certainly aware that Delonte was shaky at times, though it never seemed to show on the floor, and that made it easier to leave alone. Sometimes I would slip some references to it into a blog because I felt a responsibility to the fans, and the stakes of the season were so high. I wrestled with how to handle it, trying to show respect and compassion for Delonte and struggling with reporting on an issue that could become a problem when all the chips were on the table. It is not black and white, and just like with how the team handles him, there’s no handbook on handling an athlete who is battling these problems.”

Fair enough. But sensitivity isn’t the only factor. It's not simply a magnanimous gesture no matter how often writers speak of "respect for the situation." One reporter, speaking anonymously, says, “I have to continue working with this team going forward.” Write about an off-the-court incident that the team would rather keep quiet, and maybe it affects your access to bigger stories — free agency decisions, trade deadline, etc. It’s a common dilemma in beat reporting.

An athlete lashing out at a reporter is hardly unique, and who’s to say West wasn’t just having a really bad day? But, as one reporter told me, it's not like what happened that night is a "state secret," and in other cities it would have been the lead item.

On the other hand, there's a plethora of extenuating circumstances if you're looking for them. We know now that his marriage is troubled, as evidenced by the abuse report filed by his wife. He's dealing with serious legal issues stemming from his arrest on gun charges. And multiple reporters described the outburst as "out of character."

But the locker room incident precipitated West’s excused departure from the team and his absence in the lineup that evening. Was it an isolated incident or evidence of a larger, systemic problem? And doesn’t that outburst sound similar to the one Delonte had with a ref during a preseason game in 2008 that also was shortly followed by a leave of absence?

See? It's messy. There's a temptation, I think, to ascribe cause to effect when cause and effect are murky.

Akron Beacon Journal columnist Patrick McManamon, who wasn’t present at the time of the incident, says, “I’m not in the business for sensational stories. There are outlets for those stories, and that’s fine. But it’s not for me. Especially when someone is confronting some issues like Delonte is, which are related to mental health. I take that very seriously, because it is a serious medical situation. If the mental health issues affect the public, then it’s news. His arrest is an example. That was news because he was arrested and charged, and he was arrested carrying some serious weapons. If it affects the team, it’s also news insofar as it relates to whether he can play or not play, or if he’s with the team or not.

“Because it’s a mental illness, I also feel a very strong burden of fact and proof — it’s too easy to write and guess at his state, but without knowing his frame and state of mind from him or from someone dealing with him, i.e. the coach or GM or his doctor, I’m not inclined to guess beyond what we know. Especially since it’s related to his mental well-being. In a case like this — or with any player — if the team or Delonte want to sit down, on the record, and go through things, I’m all for writing the story. But I don’t think it’s fair to him, me or (more important) the reader to just guess on his specific situation and well-being without actual knowledge and information.”

After Delonte’s absence from training camp last year, he came back strong. But after his arrest on gun charges, the PD’s Windhorst wrote about other incidents and made it clear that West’s state of mind was difficult to assess.

“West then went out and had the best season of his career, his first as a full-time starter. He was a significant factor in the Cavs winning 66 games. But behind the scenes, there was never a doubt that he was often battling with his emotional problems.

“Some games West would sit in his uniform at his locker for an hour after the game staring into space. Sometimes he would refuse to talk to anyone. Other times he would be his jovial self, cracking up the locker room and fitting into the team’s pregame ‘family photos.’ He filmed several segments for the ESPN show Jim Rome Is Burning, showcasing his dry sense of humor that made him a YouTube hit.

“But he also often came to games late, even showing up to a home playoff game an hour before tipoff. Once, at a game in Los Angeles, West wasn’t on the bench when he was introduced as a starter, and no one on the team seemed to know where he was for a few minutes.

“Those episodes, however, never seemed to affect his play. Trying to be supportive, the team apparently gave him plenty of space. The media, appreciative of how open he’d been and sensitive to his battle, looked the other way.

“It was the same this summer when another YouTube video appeared of West and a friend waiting for their food to be cooked in a KFC drive-thru. Making jokes and freestyle rapping, West was quite funny. But numerous people left comments that it wasn’t funny because it appeared he was under the influence of something.”

Details like West “staring into space” present problems. Not every episode of silence — or joviality — is evidence of a disorder, but can start to look that way when West’s emotional state is the subject, especially when taking a retrospective look at a series of incidents. Otherwise, Windhorst’s piece put Delonte’s struggles throughout the year into perspective and illustrates the difficulties writers face when dealing with West’s actions. That struggle will undoubtedly continue through what could be the most important year in the Cavs’ history. There is no rule book for such situations, so the Cavs and the reporters who cover them better start writing one.