Are any of your local faves co-hosting big ticket fundraiser for venture capitalist MAGA Republican? 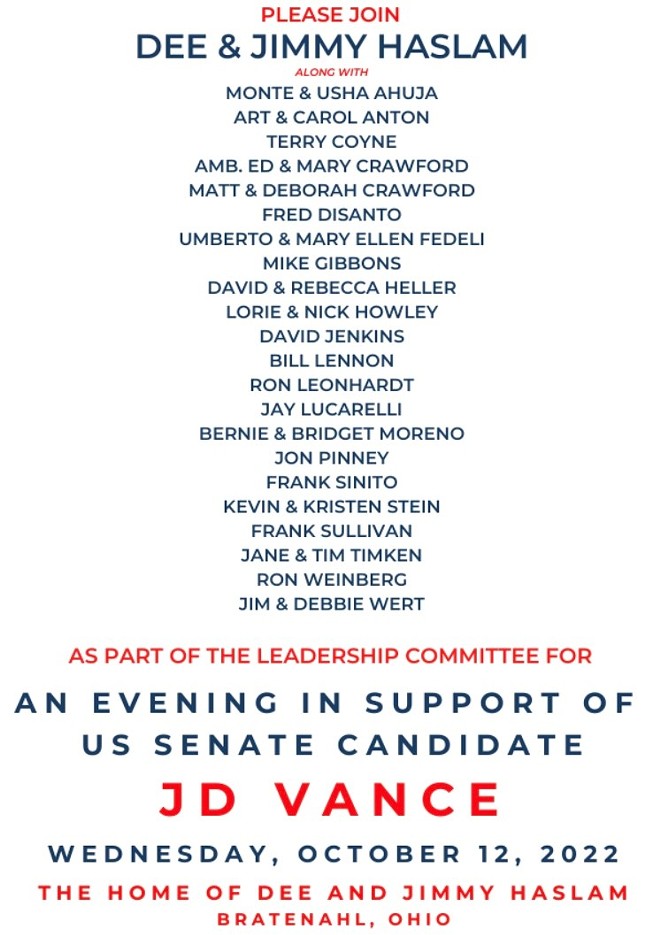 Last seen vouching for the integrity and solemn remorsefulness of quarterback DeShaun Watson and lavishing upon him the largest contract in NFL history, shortly before Watson was suspended for 11 games for serial sexual misconduct with massage therapists.

Also seen accompanying their charter-school buddy to a meeting with Cleveland Mayor Justin Bibb. (If the Haslams can so easily exploit their political influence to reshape a literal Great Lakes lakefront with their private profit in mind, why not reshape a region's education system for profit, too?)

And then of course seen at the Athletic Club of Columbus, co-hosting a fundraiser for Republican U.S. Senate candidate J.D. Vance,  America's "most famous living hillbilly."

The Haslams are trying their damnedest to get Vance elected, never mind that he is regarded by Republican strategists as one of the worst candidates in memory. One fundraiser simply would not do the trick. A candidate this bad needs endless reserves of cash from his rich donors to finance his advertising and public relations efforts, what's known popularly as a political campaign. The Haslams recognize that despite Democrat Tim Ryan's appeals to the political center, big money and Donald Trump's endorsement could be all this bearded bozo needs to succeed Rob Portman in Ohio.

And so the Haslams are  now inviting all their richest Cleveland friends to their house in Bratenahl on Oct. 12 for a high-dollar Vance event. (It is these executives and their cohort, not the mythic Appalachian working class, that represents Vance's true constituency.)

Cleveland.com's Andrew Tobias reports that all listed event chairs have committed to a $25,000 gift.


PS on this, event chairs are agreeing to give at least $25k per person or couple, which gets them their name on the invitation, access to a VIP roundtable and a photo. Let's ballpark this event at raising at least $550k for Vance then.


Many of them are highly respected luminaries in the Cleveland business community.  Here's who they are: