How Does the Cavs' "One Goal" Slogan Stack Up According to the "Experts"? 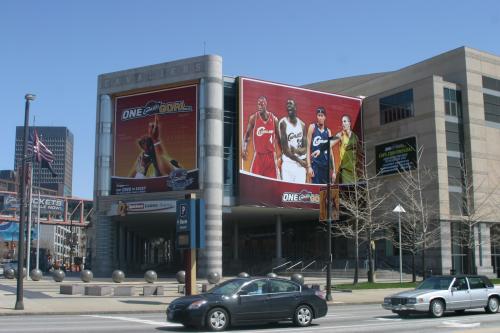 With the NBA playoffs underway, the Cavs have gone public with their slogan for the year, “One Goal™.” The laudable message of focus and unity beats last season’s “Rise Up.” To us, it sounded OK, but not great — is one goal really enough to take a team all the way? But what do we know? So we reached out to two experts on goals, achievements and impressions.

Dr. Mary Jen Meerdink — an executive coach, thinking partner, management consultant and head of Cleveland’s Dr. K. Kay Potetz & Associates — responds via e-mail: “The Cavs’ slogan, ‘One Goal,’ communicates not only a general sense of urgency and excitement about winning, but also, for anyone who hears it, it immediately evokes the concrete image of the awaiting basket at the end of the championship court.

“Everyone ‘gets’ it. In this way, whatever a given individual’s contribution may be toward that end (i.e., as player, coach, fan, sponsor), they can each connect their efforts to that clear, ultimate endpoint. So, although ‘One Goal’ may sound broad, it evokes a powerful shared vision to which everyone connected to the Cavs can feel a way their contributions are connected in a meaningful way to that final outcome.”

A marketing guy gave “One Goal” a mixed review.

“It’s a good tagline,” says Gerard Dominick, managing principal of Akron’s G-Designs and Marketing. “But I’d have had something tied more with Cleveland. They won the homefield advantage by having the best record in the NBA. I would have had ‘The Cavaliers: Bring It Home,’ which has that team effort, but also ties in with Cleveland.”

So the verdict is split. A good tiebreaker will be a championship win, which will officially make the slogan prophetic and immortal … until the Browns brings the city a fresh wave of disappointment. — D.X. Ferris