Mike DeWine Will Once Again Be Your Governor, Ohio 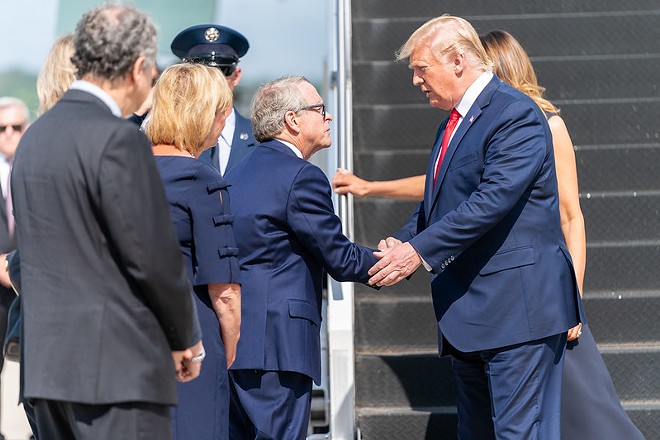 Early poll numbers indicate Ohio Gov. Mike DeWine has been re-elected, defeating challenger Nan Whaley, according to calls from the Associated Press and others that were made minutes after polls closed in the state.

DeWine, a Republican, began his first term in 2019 after serving in Ohio's statehouse, as a U.S. senator and as a lieutenant governor. The Yellow Springs native earned praise from medical experts in 2020 for Ohio's COVID-19 public health protocols – including venue capacity limits, stay-at-home orders and indoor masking – but got scorn from many far-right Republicans who rallied against coronavirus vaccines and other safety measures.

The tightrope walk has led to some interesting moments, including yesterday when DeWine made an appearance at a Trump-led rally.

Gov. DeWine speaks at Trump's rally to some jeers


Whaley, a Democrat, is the former mayor of Dayton who served from 2014 until the beginning of this year. Her leadership has been cited as a major reason Dayton's unemployment numbers declined significantly and was in office when the city was just the fourth in the nation to sue pharmaceutical companies and others over the opiate addiction in Ohio. She has been a vocal advocate for gun safety legislation, abortion rights and banning LGBTQ+ conversion methods.

This year’s midterm elections followed a weird special election that was required after the state refused to draw new voting maps. A Republican-led commission redrew the boundaries of Ohio's House districts earlier this year in an ongoing, dramatic redistricting battle. Many of the ensuing boundary maps repeatedly were rejected by the Ohio Supreme Court as being unconstitutional for unfairly favoring Republicans.

Though the Ohio Supreme Court deemed the maps unconstitutional, a federal court eventually declared that Ohio must use them for August's special election and the Nov. 8 midterms due to timing, but the state is required to pass fairer maps before the 2024 election. However, the ramifications of voting within the current redrawn – and, many say, unfair – boundaries in districts throughout the state will affect elections and priorities for years to come.

All Ohio election results are preliminary until certified by the Board of Elections.